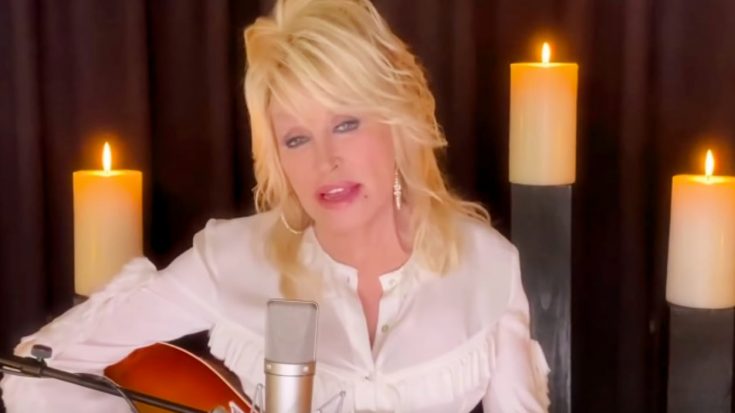 On March 20, 2020, Kenny Rogers passed away at the age of 81 due to natural causes. His family issued a statement shortly after his passing, saying he “passed away peacefully at home” and was “surrounded by his family.”

Since the Rogers family published their statement in the middle of the night, most people didn’t learn of his passing until the morning of March 21, 2020. That’s when tributes came pouring in from country artists.

One of the most heartfelt tributes came from Rogers’ longtime friend and duet partner, Dolly Parton. She shared a video message in which she addressed Rogers’ death:

“I know that we all know that Kenny is in a better place than we are today, but I’m pretty sure he’s going to be talking to God some time today if he ain’t already, and he’s going to be asking him to spread some light on a bunch of this darkness going on here,” Parton said, referring to the COVID-19 pandemic.

She then spoke about how his death was affecting her, and made it clear she was hurting:

“I loved Kenny with all my heart…And my heart is broken. A big ol’ chunk of it has gone with him today. I think that I can speak for all his family, his friends, and fans, when I say that I will always love you.”

You never know how much you love somebody until they’re gone. I’ve had so many wonderful years and wonderful times with my friend Kenny, but above all the music and the success I loved him as a wonderful man and a true friend. pic.twitter.com/hIQLIvt8pr

So when CMT decided to create a special in Rogers’ honor, it came as no surprise that Parton agreed to participate. Parton joined other artists such as Lionel Richie, Lady Antebellum, Randy Houser, and Jennifer Nettles in a musical tribute to Rogers called CMT Giants: Kenny Rogers.

The CMT special also served as a benefit for MusiCares, a program that provides aid to musicians and music industry personnel during times of need. Right now, MusiCares has established a COVID-19 relief fund to help those affected by all of the concert cancellations and postponements.

Rogers’ family and team said donations could be made to MusiCares in his honor, as he was always a strong supporter of those who work in the music industry.

Because of the pandemic, artists participating in the CMT Giants special couldn’t travel to a studio to sing in honor of Rogers. So instead, they filmed videos of themselves singing his songs from the safety of their own homes.

In Parton’s case, she grabbed an acoustic guitar and surrounded herself with a bunch of candles as she sat down and sang Rogers’ 1977 single “Sweet Music Man.” Her performance was touching to see, and although she never cried, she wore her emotions on her sleeve.

You can hear the heartbreak in Parton’s voice as she sings “Sweet Music Man” in honor of her beloved friend. Watch her tribute to him below.

Rogers is clearly missed, but he will always live on as long as people like Parton continue to share his songs. May he rest in peace.