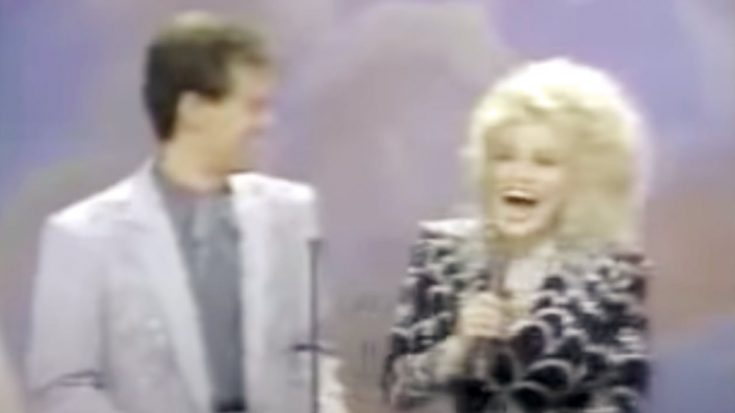 In 1988, Randy Travis was one of the new artists on the country music scene.

On the other hand, Dolly Parton was already a seasoned vet, especially when it came to attending awards shows such as the CMA Awards.

You know how it goes, the “new guy” always seems to get picked on for a while until another new person comes along. Well, as a fresh face in country music during the late 80s, Travis was subject to a bit of teasing from his more experienced peers, particularly Parton.

During the 1988 CMA Awards, Parton couldn’t keep herself from teasing Travis. Sitting on his lap, she told him that if she were “a few years younger” that they just might stand a shot at being together. Her comments prompted a smile and a few embarrassed laughs from Travis.

Giving Randy Quite The Scare

The following year, Parton decided to keep the act up when Travis went on stage to present the award for Female Vocalist of the Year. As Travis walked out on stage, Parton followed close behind.

The crowd cheered as soon as they saw her, but Travis was completely oblivious until he made his way to the microphone.

Once Travis finally saw Parton, his reaction was priceless. Teasing him once more, she told him she didn’t want to interrupt his presentation, but that she just came out to say “hello.”

The two shared a friendly hug before Parton dashed backstage. Turning back to the crowd, Travis had a big smile on his face as he said, “It’s a tough job.”

We’re sure many of you remember watching this funny moment when it first aired. Now you can get a good laugh out of it again.

In later years, Travis and Parton went on to record a duet together, titled “Do I Ever Cross Your Mind.” You can listen to it below.