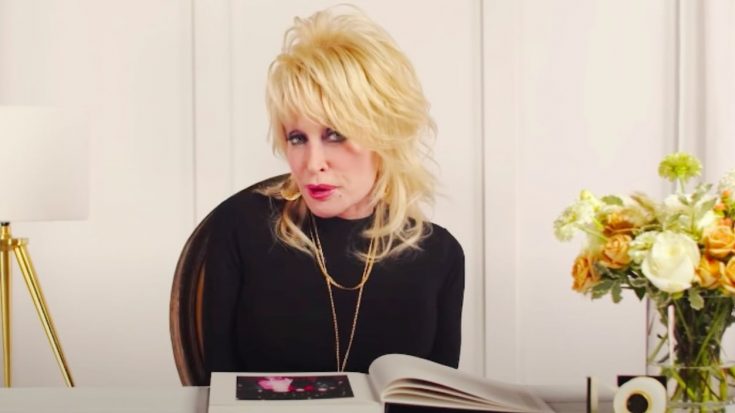 After her many decades in the entertainment industry, Dolly Parton has been given the chance to wear many fashionable outfits. She has developed a sense of style that is entirely her own, often involving big wigs and rhinestone-covered ensembles.

Parton recently sat down with Vogue to share her thoughts on 11 of her past outfits. The outlet pulled photos from throughout Parton’s career, starting in the 1970s and working up to today.

A signature @DollyParton look features big hair, major shape, and loads of rhinestones. And in a new Vogue video, she took a look back at some of her favorite fashion moments that incorporate all of these elements. https://t.co/LPHqTCTK83 pic.twitter.com/iQIIg8FNDB

The first outfit Parton discussed was the one she wore for the cover of her album Jolene, which was released in 1974.

She wrote a blue and white stripped jumpsuit that had puffy sleeves, which Parton says she “always loved.” Another reason why she liked the jumpsuit was because it was comfortable and easy for her to move around in.

One other outfit she spoke about was the pink dress she wore for the premiere of the movie 9 to 5 in 1980. Since it was her first movie, Parton wasn’t sure what to wear at the event, so the film’s costume designer Ann Roth made her a dress.

“And I just remember that was probably the first time I had probably ever really felt like I was fashionable,” she said.

Parton went on to share the stories and memories behind many of her other famous outfits. Listen to her full breakdown of her past fashion choices below.

Once you finish the video, let us know which one of the 11 outfits was your favorite. It’s hard to choose, because Parton always dresses to the nines!