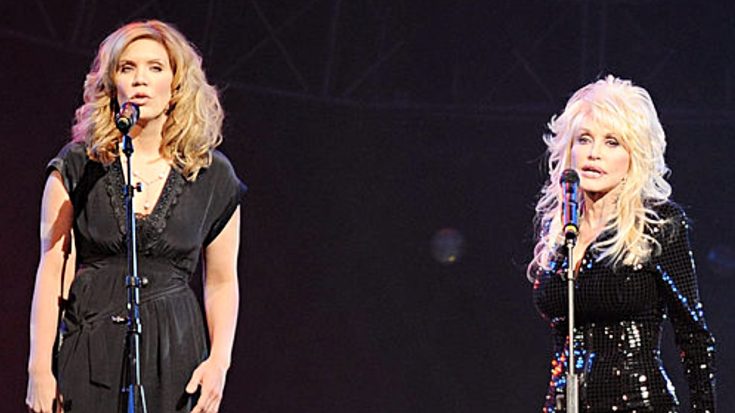 The Collaborations You Never Recognized

You may not have realized this before, but two of country music’s most iconic songstresses have been working together for decades. Those two leading ladies are none other than Dolly Parton and Alison Krauss.

If you look back as far as Parton’s 1991 album Eagle When She Flies, you’ll see Krauss’ name listed as one of the harmony vocalists. Her name has been an almost constant presence on Parton’s albums ever since, appearing most recently in the credits for her 2011 release Better Day.

But Parton and Krauss haven’t kept their singing constrained to studio work. The two have also performed together live on a number of occasions, such as when they sang a slowed down version of “9 to 5” during the 2003 concert special Women Rock.

Getting Together Again To Honor A Legend

Parton and Krauss united to sing yet another duet, and it’s one we’re sure all of you classic country fans will love.

That’s because their duet is on a song already proven to be a classic country staple…Roger Miller‘s “The Last Word in Lonesome is Me.”

Released as a single off of Miller’s 1965 album The 3rd Time Around, “The Last Word in Lonesome is Me” wasn’t a huge chart success for him. But it was later immortalized when Eddy Arnold took it to the second spot on the country charts in 1966.

Parton and Krauss recorded their rendition of the song for the album made in Miller’s honor, King of the Road. It isn’t the first time either singer has performed one of Miller’s songs. In fact, Krauss included a cover of his track “River in the Rain” on her most recent album, Windy City.

If you love how Krauss’ sweet soprano voice sounds on that song, just wait until you hear it alongside Parton’s on “The Last Word in Lonesome is Me.”

Parton takes the lead on the track, while Krauss falls into her traditional role of harmonizing alongside her. The combined sound of their voices is nothing short of heavenly, as they work together to turn Miller’s timeless song into a new work of art.

You’re sure to have even more appreciation for Parton and Krauss’ talents once you listen to their cover of Miller’s song in the clip below.