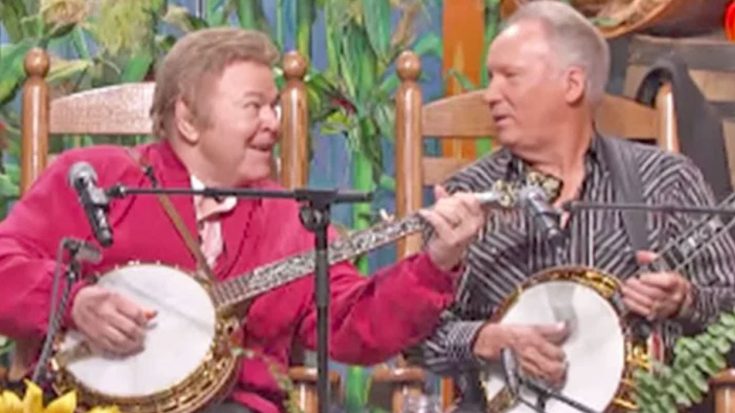 Now this will take you down memory lane, folks!

As most of you will remember, Roy Clark served as host of the popular television show Hee Haw from 1969-1992. He displayed his incredible musical talents playing the banjo, guitar, and many other instruments. One especially memorable moment from Hee Haw was when Buck Trent joined Clark for an epic battle of “Dueling Banjos.”

Y’all will remember “Dueling Banjos” from the 1972 film Deliverance, but it was actually written in 1955 by Arthur Smith.

Clark and Trent, then both with heads full of dark brown hair, stunned the audience with a riveting rendition of the classic banjo tune.

After the entire room sang the Hee Haw theme song, Anderson took to asking Clark a few questions before his performance, which turned into over five minutes of side-splitting laughter.

Clark proved that he hadn’t lost his sense of humor saying, “I haven’t played the banjo since the last time!” when a guitar tech was handing him his banjo, garnering lots of laughs.

Conveniently sitting next to a now silver-haired Buck Trent, the two picked up right where they left off and performed a short version of “Dueling Banjos.” Their infectious energy and upbeat playing got everyone clapping along and will have you smiling from ear to ear in no time!

Now that Roy Clark has passed away, it’s videos like this that we will remember him by.

Watch the awesome performance below.