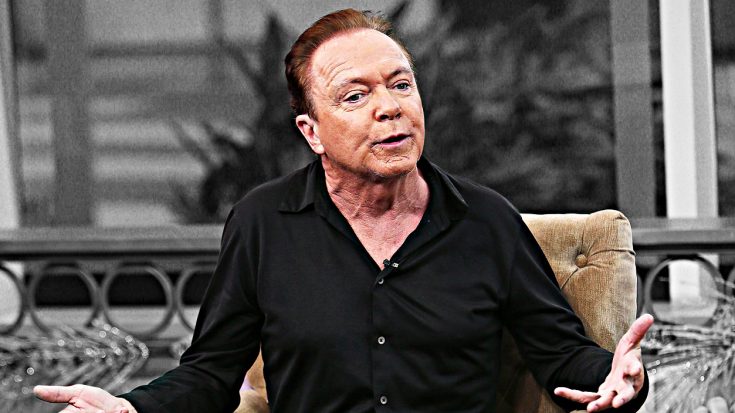 But in a brand new clip from this posthumous documentary – we learn that David Cassidy wasn’t fighting dementia, but instead, something else entirely.

Cassidy was known worldwide for his singing and musical talents – alongside his portrayal of Keith Partridge in the hit TV series, The Partridge Family.

In 2012, he spoke with CNN and discussed watching his mother crumble under the unimaginable effects of dementia, and in February 2017 he opened up to People Magazine about witnessing the disease take hold of his grandfather as well.

Just months later, and fans began to notice he was struggling with his performances. Several outlets posted videos of him forgetting lyrics and other mistakes. This was something he attributed to the disease…

On November 18th, 2017, Cassidy was hospitalized and was suffering from liver and kidney failure. Doctors placed him in a medically-induced coma for two days and he awaited a liver transplant. He passed away on November 21st, 2017 from liver failure.

His Struggle With Substance Abuse

David Cassidy openly admitted he had a problem with alcohol in 2008. He later was arrested for a DUI in Florida in 2010 and in New York in 2013.

A year later, he was charged with suspicion of DUI in California and was ordered to attend inpatient rehabilitation and was placed on probation for five years.

Because of this, during his struggles with performing, many believed alcohol was a contributing factor.

Television network A&E had been working with Cassidy on a documentary about his life called David Cassidy: The Last Session when he began to really struggle with what he told everyone was dementia.

In a brand new clip from the forthcoming film, Cassidy’s telephone conversation with one of the show’s producers is revealed – and he confesses his deep, dark secret to her.

“I just met with the doctor and I have liver disease…My life has changed dramatically. The first few days I was unconscious and near death. The last week or so my memory has come back.”

He then explains what the doctors told him – and revealed the truth about his dementia diagnosis to the producer.

“There is no sign of me having dementia at this stage of my life. It was complete alcohol poisoning. And the fact is, I lied about my drinking,” he told the producer, Saralena. “The head doctor at the hospital, she said, ‘I believe that your dementia was directly related to your alcoholism.’ You know I did it to myself, man. I did it to myself to cover up the sadness. And the emptiness.“

This new documentary is set to showcase his final time on stage and in the recording booth – but will be told through his own words, says a network executive.

David Cassidy’s struggle is far too common and known to so many. Our hearts break that he endured such pain and trials in his final moments.

Watch both clips from the upcoming documentary below.