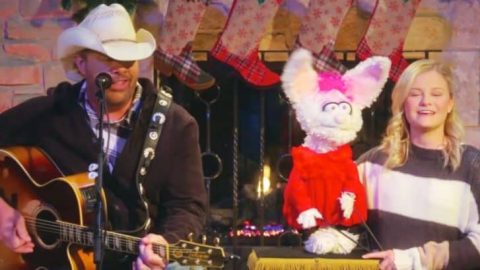 A Talented Star Was Born

In the summer of 2017, the world was introduced to a then 12-year-old girl who, within months, would be a global superstar. Her name is Darci Lynne Farmer.

Farmer, who is both a singer and a ventriloquist, was one of few “golden buzzer” contestants on her season of America’s Got Talent. Meaning that, during her audition, one of the judges used their golden buzzer to send her straight on into an advanced round of the competition

As the weeks passed, Farmer continued to amaze with her performances, which she made more and more complicated the further she got in the competition.

So of course, it came as no surprise when Farmer was named the winner of her season of America’s Got Talent. In winning, Farmer was given the chance to perform in Las Vegas, and those shows later spawned her successful nationwide tour.

NBC, the network which propelled Farmer to fame in the first place, honored her accomplishments by giving her a Christmas special in 2018.

Definitely wouldn’t have been ‘My Hometown Christmas’ without the whole gang!! ? #DarciLynneXmas pic.twitter.com/kaB0I9URTa

Called Darci Lynne: My Hometown Christmas, the special featured performances from Farmer and her many puppets, including fan-favorites Edna, Petunia, and Oscar. She was joined by some human guests as well, such as Broadway star Kristin Chenoweth, a cappella group Pentatonix, and country music superstar Toby Keith.

Keith teamed up with Farmer and her bunny puppet Petunia for a charming performance of a song that’s been a country Christmas staple for generations. That song is none other than “Rudolph, the Red-Nosed Reindeer.”

While many simply recognize the song as being part of the famous stop-motion movie of the same title, it was around years before that. It was made famous by “The Singing Cowboy” Gene Autry, who took the song to the top spot on the U.S. country chart.

With a group of children gathered around to watch them sing, Farmer, Keith, and Petunia didn’t waste any time as they jumped into singing “Rudolph” together.

While Farmer sang in her own voice most of the time, she occasionally switched into Petunia’s voice for some short lines and interjections. Every time she did this, she did so effortlessly, never missing a beat.

Keith’s addition to the performance made everything all the more delightful. We could never get tired of hearing him sing Christmas songs!

Petunia and I had so much fun with @tobykeith in my hometown!! ?? #DarciLynneXmas pic.twitter.com/WnAZqy2kak

We bet that Keith was pretty impressed by what he heard from Farmer that day, and you’re sure to feel the same way. Check out their charming Christmas duet in the video below.

Now that Farmer has performed with Keith, we’d like to see her sing with other country stars. Who do you think would make a good duet partner for her?