Craig Morgan Makes Kellie Pickler Cry While Singing “The Father, My Son, And The Holy Ghost” 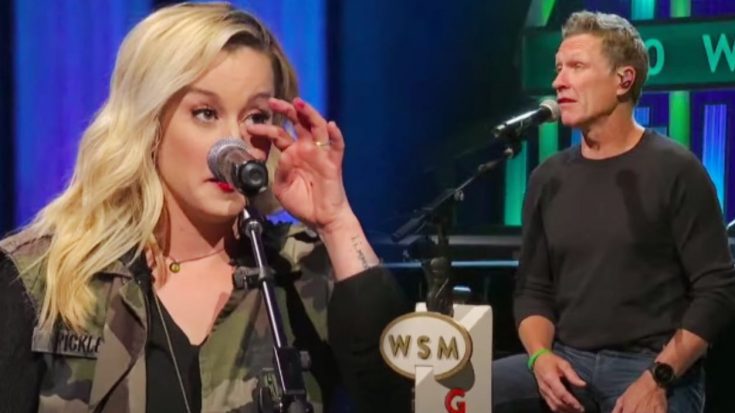 In July 2019, Craig Morgan debuted an extremely personal song on the stage of the Grand Ole Opry. That song, titled “The Father, My Son, and the Holy Ghost,” was written by Craig following the death of his son, Jerry, in 2016.

Jerry was only 19 years old when he passed away. Craig struggled to come to terms with his death, but found strength through his faith and music.

Speaking to People, Craig said he suddenly woke up one night after Jerry’s passing and felt inspired to write a song. “It was 2:30 in the morning and there I was – singing the entire chorus in my head before I even woke up enough to put the words down on paper,” he recalled.

That song became “The Father, My Son, and the Holy Ghost.”

A video of Craig’s Opry performance was published in September, and the song quickly rose up the iTunes chart. Its rise was aided by Craig’s good friend Blake Shelton, who pushed for the song to go to #1 above his own single at the time.

Thanks to Blake’s public pleas, “The Father, My Son, and the Holy Ghost” reached many more ears. Millions of people heard the song, and sent it to the #1 spot on both the iTunes country and all-genre charts.

Craig went on to deliver live performances of the song during visits to The Kelly Clarkson Show and TODAY. Then, he brought things full circle by singing it on the Opry stage yet again on Saturday (May 23).

The other two performers at the Opry that day were Kellie Pickler and Steven Curtis Chapman. They joined Craig to deliver a special Memorial Day Weekend show in “honor the U.S. Military and all of the essential workers on the frontlines fighting the war against COVID-19.”

Get ready for our annual Grand Ole Opry Salute the Troops Memorial Day Weekend Special with Craig Morgan, Kellie Pickler and Steven Curtis Chapman. We will honor the U.S. Military and all of the essential workers on the frontlines fighting the war against COVID-19.

Due to the coronavirus pandemic, the Opry has been hosting all of its Saturday evening shows without a live audience. So Steven, Kellie, and Craig sang to an empty Opry house while their performance was broadcast to audiences tuned in on radio, TV, and an online livestream.

The artists took turns sharing songs, and Craig eventually got around to singing “The Father, My Son, and the Holy Ghost.” He delivered a passionate performance as always, and his fellow artists could be seen crying on stage.

Kellie wiped tears away from her eyes following the performance. She rushed to Craig’s side, saying she was “breaking the rules” concerning social distancing before giving him a hug.

Steven could also be seen brushing away tears. The song surely resonated with him, since his daughter, Maria, died in 2008 at the age of five.

Tune in below to watch the heart-tugging moment Craig sang “The Father, My Son, and the Holy Ghost” in front of Kellie and Steven on the Opry stage. His performance starts around the 55:58 mark in the video.

We can’t blame Kellie and Steven for getting emotional, because this song gets to us every time.