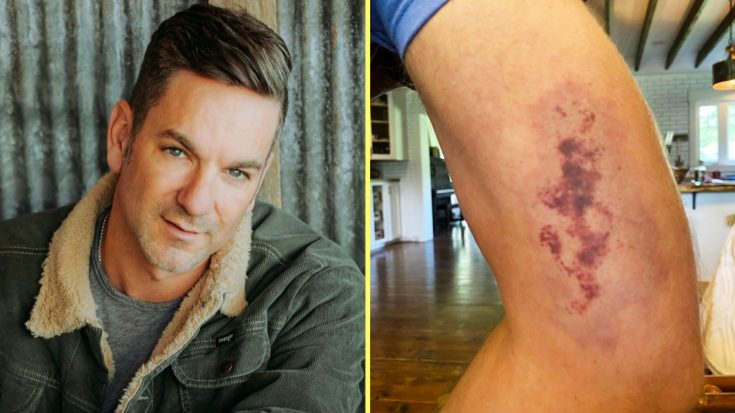 Country music fans might know Craig Campbell from his two-decade career in country music. He began as a songwriter and a gig guitar player for Tracy Byrd’s road band before forging out on his own solo career.

His singles over the last ten years include “Family Man,” “Fish,” “When I Get It,” “Outta My Head,” “Keep Them Kisses Comin’,” “Tomorrow Tonight,” “Outskirts of Heaven,” and “See You Try.”

On Monday (June 1), Campbell took to social media to ask his followers and fans about what he believed was an insect bite. While we are unsure when the bite actually occurred, he went to a minute clinic on Sunday (May 31) to get it checked out. As time went on, the bite mark started to look worse and he says it “hurts like hell to the touch.”

He shared three photos on Instagram to see if anyone had dealt with something similar. The first photo was on the way to the clinic, second photo is later at night on Sunday, and third photo was taken Monday, June 1.

Anyone of y’all ever been bit by an insect (spider, mosquito, etc) and it look like this? The first photo was from Sunday morning on the way to the minute clinic. Second photo was last night and last photo was taken this morning. It hurts like hell to the touch!! Somebody tell me what bit me ?

Many people started chiming in with their opinions, which included everything from a black widow spider bite, shingles, as well as a bite from a brown recluse.

Campbell updated fans on Tuesday (June 2) after he had seen and spoken with two different doctors who both believe he was bitten by a brown recluse spider. He added that he would be meeting with a plastic surgeon to see if skin grafting will be necessary.

He also quoted his sister, who says, “Brown recluse are straight from the pits of Hell!!”

Brown recluse spiders are no laughing matter and are one of three spider species that require medical attention should they bite you. The other two are black widow and Chinese recluse. It also is not uncommon to not actually feel the spider bite you, much like Campbell, yet feel it afterwards.

We hope Craig heals up quickly! See the photo from his update below.

UPDATE: I’ve seen 2 practitioners so far and the general consensus is a brown recluse bit me. I’m going today to talk with a plastic surgeon to discuss next steps in case skin grafting is needed. In the words of my sister, brown recluse are straight from the pits of Hell!! By the way…I feel fine but my arm hurts super bad ?