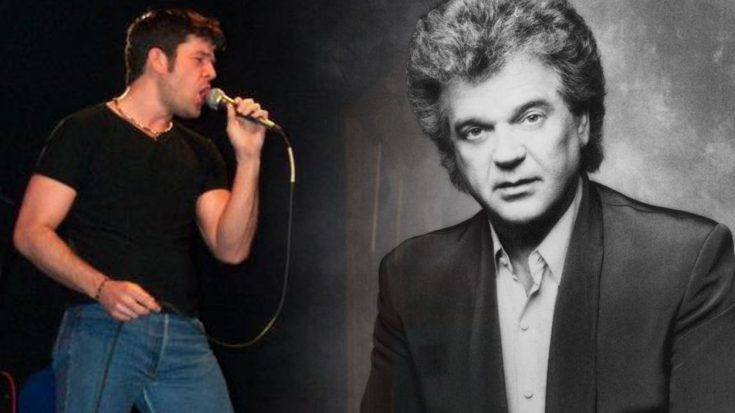 Taking the stage at Loretta Lynn’s place, this heir to a legacy melted the hearts of every single concert-goer when he picked up the mic and started in on this unforgettable classic.

Released in 1973, Conway Twitty’s chart-topping hit, “You’ve Never Been This Far Before” was launched as the second single and title track of his No. 1 selling record that same year. Not limiting its success to just the country charts, this hot single became Twitty’s first (and only) single to cross over to the Billboard Hot 100, nailing the 22nd spot.

Twitty’s 10th No. 1 single as a solo artist, “You’ve Never Been This Far Before” became an iconic track during a time when country was experiencing tremendous growth.

45 years ago Conway Twitty topped the Billboard country albums chart with "You've Never Been This Far Before". #MusicIsLegend pic.twitter.com/8Z504zQwyT

Since Conway’s tragic passing in 1993, many impersonators have stepped forward and tried to imitate his genuine, heartfelt storytelling with music, but most have not come close to matching the true country grit Conway always brought to the stage.

In the wake of his passing, his son, Michael Twitty and grandson, Tre Twitty, have taken to carrying on his musical legacy by performing his classic hits and touring with fellow country singers all over the world.

Twitty and Lynn proving true legends never go out of style; @TreTwitty and @taylalynnheller are at the Esplanade next week with songs and stories about their legendary grandparents https://t.co/kkrlniQ6ZV #medhat @MedHatEsplanade pic.twitter.com/NLAoiZj2Cz

During one of their delightful performances, Loretta Lynn invited them out to her ranch in Hurricane Mills, Tennessee for an annual celebration of Conway’s life called Remembering Conway Twitty. The one-of-a-kind event features memorable performances from many people in Conway’s life, including from Loretta herself!

Watch these stunning performances by Tre Twitty singing his granddaddy’s hit “You’ve Never Been This Far” below!