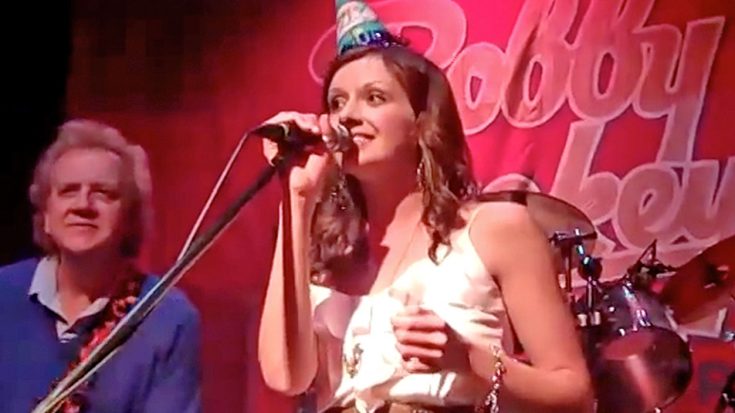 While she may be charting number one singles of her own, going on her own tour, and recently engaged to another country star, it wasn’t too long ago that the world didn’t know the same, Carly Pearce. The young singer was determined to become a Nashville star from a young age. From performing at Dollywood five times a week to touring with the Josh Abbott Band, she wasn’t letting anything get in her way.

Her Rise To Fame

It wasn’t until her hit debut single, “Every Little Thing” that people would start to recognize her sound. The song reached No. 1 and she hasn’t slowed down since.

Prior to breaking out as a country artist, Pearce was just a 21-year-old celebrating her birthday at a bar. So what better way for an aspiring country singer to end her big day other than on stage? On top of that, Pearce chose to cover one of the most iconic songs in the history of the genre.

Back in 2010, on the night of her 21st birthday, the talented young vocalist got up on stage for an impromptu performance of Patsy Cline‘s “Walkin’ After Midnight.” Donning a party hat, the singer delivered a striking rendition of the ’50s hit, proving she was always destined for stardom.

“Walkin’ After Midnight” was released by Cline in early 1957, the song going on to become her first major hit. While reluctant at first, the late country singer agreed to record the song after some persuasion from her label. Later that decision would go on to be one of the best decisions of her career.

On this day in 1956, Patsy Cline recorded "Walking After Midnight" at Bradley Studio.