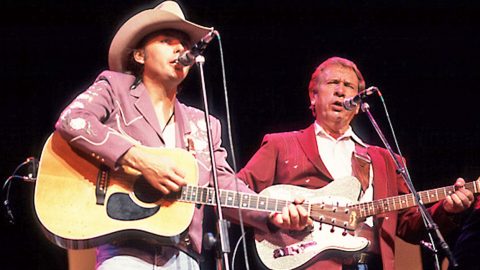 Country stars Buck Owens and Dwight Yoakam took the stage for a captivating performance of their duet “Streets of Bakersfield“ in 1988 which even went on to be aired on the Academy of Country Hits in February 1993.

“Several of those hits are duets with very interesting backstories,” one of the co-hosts announce. “Like this one. It seems like Dwight Yoakam right from the time he was a little fella’ with holes in his jeans was a big fan and admirer of Buck Owens. So when he went on to make a career of his own, Dwight traveled all the way across the country to Bakersfield, California to sing a song with Buck.”

How many of you that sit and judge me ever walked the streets of Bakersfield? ~ Buck Owens #NASCARGoesWest pic.twitter.com/LuxwSzQWlK

The two country stars share center stage together both with a guitar in hand for an enthusiastic performance of their major country hit. The crowd applauds wildly at the end of the performance and Buck tips his hat to them in gratitude.

“I came here looking for something I couldn’t find anywhere else, Hey I’m not trying to be nobody, just want a chance to be myself,” they sing together. “How many of you that sit and judge me ever walk the streets of Bakersfield?”

“Streets of Bakersfield” was a major country hit and peaked at number one on the Hot Country Singles chart. The song details the travels of the narrator of the song in his journey to Bakersfield and was inspired by the writer, Homer Joy, and his actual experience in the city leading up to him penning the song.

You can watch their duet of “Streets of Bakersfield” in the video below.