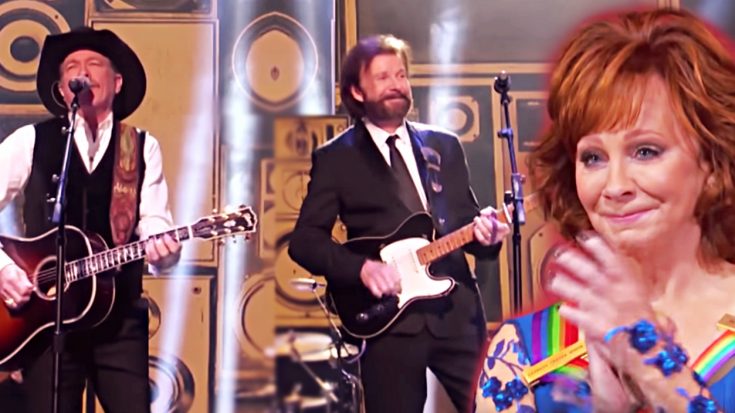 This year, the Kennedy Center Honors recognized country music in its 2018 batch of honorees with none other than the fiery red-head herself…Reba McEntire!

According to the Kennedy Center Honors’ website, “exceptional artists who have made enduring and indelible marks on our culture” are nominated for and receive the prestigious award.

Alongside Cher, Hamilton co-creator Lin Manuel Miranda, and several others – Reba was celebrated for all her major accomplishments and the impact she has made on this world.

Just as in past years, a number of artists celebrated the honorees by performing covers of their songs. One of them being a rare televised performance by the dynamic duo, Brooks & Dunn.

Brooks & Dunn have had a partnership with Reba that goes beyond just a working relationship. When Brooks & Dunn were set to play their last show, Reba joined the duo in 2010 to perform their collaborative “Cowgirls Don’t Cry” at Nashville’s Bridgestone Arena.

Why Haven’t I Heard From You?

Released in 1994, Reba’s hit song, “Why Haven’t I Heard From You?” was every broken-hearted gal’s anthem. The bluesy, rockin’ country tune was accompanied by a fun music video featuring a red-headed Reba getting pampered and trying on a variety of wigs after being stood up.

Since Brooks & Dunn had their “final” show, they went on to create music individually but were brought back together by Reba McEntire for a Las Vegas residency.

Experience a once in a lifetime performance by Reba with Brooks and Dunn in VEGAS!

Get signed up for your chance to win: https://t.co/czCvVvWbhY pic.twitter.com/OaBOoSUMsR

While they perform on stage with each other, it is rare for the duo to join in on a televised event – but they knew this was a special day for their friend Reba. As they sang “Why Haven’t I Heard From You” on the Kennedy Center Honors’ stage, Reba fought back tears in the stands. This is truly a performance you don’t want to miss. Check it out in the video below!