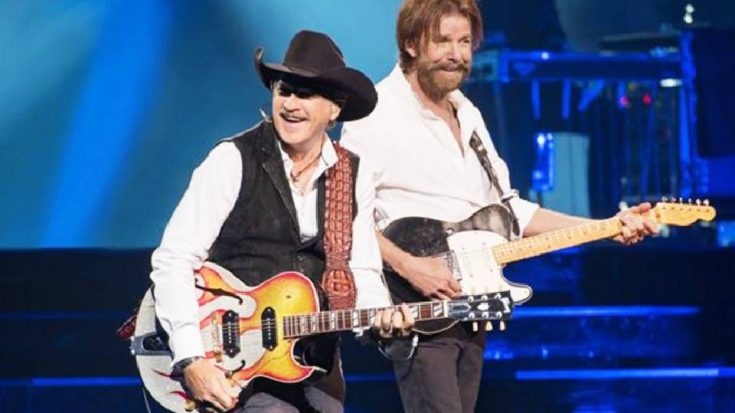 In August 2009, award-winning country duo Brooks & Dunn announced their retirement. They then played their last concert together on September 2, 2010 at Bridgestone Arena in Nashville, Tennessee.

Both Ronnie Dunn and Kix Brooks recorded solo projects and reunited in 2015 for a Las Vegas residency with good friend, and fellow country legend, Reba McEntire, which has spanned five years now!

Can't wait to get back to Vegas with Reba McEntire! Get your tickets for our winter residency: http://bit.ly/BDinVegas19

Kix and Ronnie reunited as Brooks & Dunn for the 2019 album Reboot, which features them re-recording some of their most well-known songs with guest singers. Luke Combs, Midland, Brothers Osborne, and Kacey Musgraves were some the singers on the project.

The #REBOOT is here! Listen to our new collaboration album now: smarturl.it/BrooksDunnReboot

To support the album, the duo just announced on Facebook that they will be touring – something they haven’t done in 10 years!

See their announcement below.

We’re hitting the road! Announcing the Brooks & Dunn REBOOT 2020 TOUR. Get all the details on dates & cities near you here: brooks-dunn.com/tour/

“So much for ‘we quit,’ huh?” Ronnie Dunn said. “That horse that we were afraid of riding into the ground apparently didn’t share our sentiment… he gotta fire in his belly raring to go another round or two. I like the ring of it…’Brooks & Dunn ride again!’”

“The memories of playing live are what have kept the fire burning for us,” Kix Brooks added. “Performers who have had the kind of nights like we’ve had with our fans, can never really let that go. Live is where we’re most at home, and it’s gonna feel good to be back in the saddle, let’s rodeo! We’ll see y’all out there on the trail.”

The tour kicks off on May 15 and runs until September 19. Check out the tour dates below.