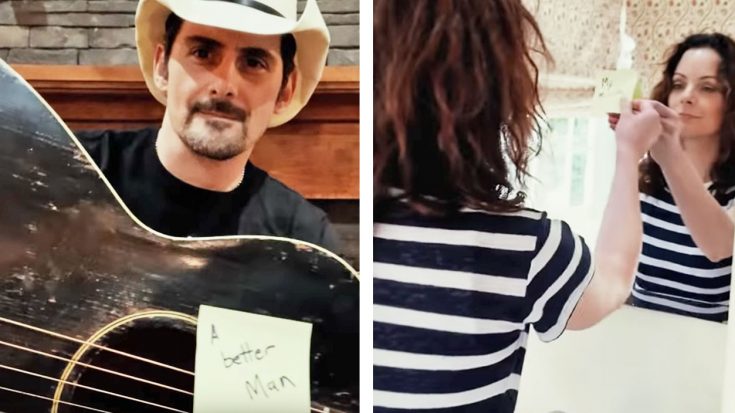 Brad Paisley and his wife Kimberly, have been going strong for well over a decade.

It all began when Brad was on a date with another girl. 19-year-old Brad took his then-girlfriend to see Father of the Bride when he caught himself falling in love with the woman on the screen. The famous 1991 movie featured young Kimberly and Brad knew instantly he had to meet her.

Well, flash-forward to 2001 and Brad still couldn’t get Kimberly’s face out of his head. So, he took the first step and cast Kimberly in the music video for his song “I’m Gonna Miss Her.” The rest was history.

Ever since the couple has been happy as can be. 15 years down and the Paisleys have built a beautiful life for themselves and their two boys. But even after all this time, Brad still knows how to keep the spark alive and appreciate his bride just like the day he met her.

Oh, but one thing's for sure How could I not have faith In the God that created her Your turn, show me your Miracle.

Brad’s latest song, “My Miracle” was written all in the image of Kimberly. The powerful and romantic lyrics prove just how deep his love goes.

“My miracle is five foot five. No doubt in my mind she’s the reason I’m alive.” Brad continues, “I wasn’t always spiritual, oh but one thing’s for sure, How could I not have faith in the God that created her?”

Now, Brad is sharing the lyrics and his love through a home video. The lyric video shows Brad writing on sticky notes and placing them around the house. The end of the video shows Kimberly’s reaction to finding the notes followed by other women getting notes from their husbands as well.

Leave it up to Brad to create such a unique and cute idea for a lyric video!