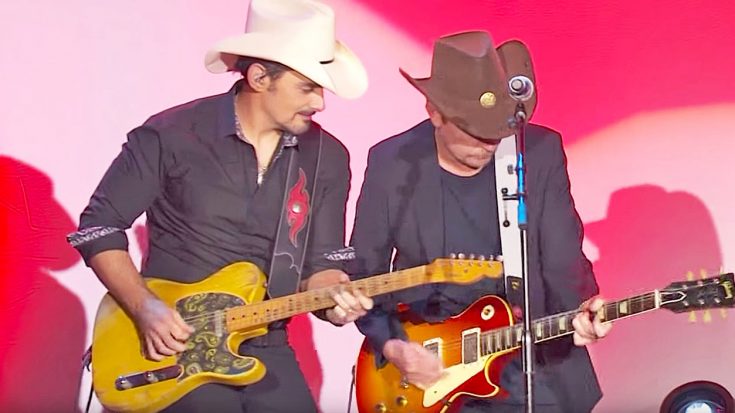 You’ve likely seen Brad Paisley take part in his fair share of guitar jams over the years. But we bet you’ve never seen a jam session like the one we have to share with you here.

In November 2017, Paisley was one of the key players at actor Michael J. Fox’s annual A Funny Thing Happened on the Way to Cure Parkinson’s gala. Known for his starring role as Marty McFly in the Back to the Future films, Fox was diagnosed with Parkinson’s in 1991. He was only 29 years old at the time.

Fox went public with his diagnosis in 1998, and since then has been a strong advocate for others battling the disease. His annual gala helps raise funds for Parkinson’s research in the hopes that one day a cure can be found.

Watch: @realmikefox and family step out in support of @MichaelJFoxOrg's A Funny Thing Happened On The Way To Cure Parkinson’s fundraiser, saying it's an honour to have so much support for the cause https://t.co/bh3fCMCnvT pic.twitter.com/lf3Ir1WzM0

For the 2017 gala, Paisley entertained the guests with a series of some of his signature hits. But he also took some time to honor the host, and welcomed him on the stage to perform.

With his own guitar in hand, Fox was greeted with an enthusiastic wave of applause as he made his way to Paisley’s side.

Before they started playing, Paisley made sure that Fox knew just how much he meant to him:

“I’ve been a fan of yours since I was tiny,” Paisley said. Fox had the perfect response, saying, “I’m still tiny and I’m a fan of yours.”

After that, the two singers engaged in an epic jam session on a rock and roll classic…Chuck Berry’s “Johnny B. Goode.” Released in March 1958, “Johnny B. Goode” climbed as high as the eighth spot on the Billboard Hot 100.

A short clip from the gala shows a snippet of Paisley and Fox’s guitar jam to the song. They looked like they were having a grand ole time up there, and we can’t blame them! “Johnny B. Goode” is such a fun song!

You can tune in below to catch Paisley and Fox playing “Johnny B. Goode” together. Something like this is worth watching again and again!