Brad Paisley Cries During At-Home “In The Garden” Performance 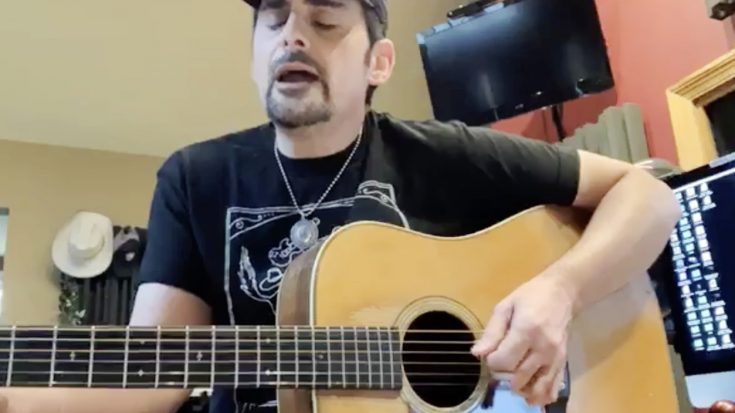 We first heard Brad Paisley sing the gospel song “In The Garden” in 1999 when he released his debut album, Who Needs Pictures. It served as the final song on the 13-track album, which helped launch him into superstardom.

“In The Garden” is one of his favorite songs so when a fan requested it during a Facebook Live session he was holding from his home on March 19, 2030, he knew he had to sing it.

“There’s something very comforting about these kinda songs right now,” Brad said as he dove into the musical intro on his guitar.

At the end of the first verse, Paisley stopped playing because he was getting emotional. He tapped his guitar twice, said, “Sorry,” and continued. Before singing the chorus, the singer paused once again to try and keep his emotions in check.

Paisley paused once more during the chorus, with the shakiness in his voice apparent. Upon finishing the last lyric, he said through tears, “Sorry, that has a new meaning to me.”

Due to the coronavirus pandemic, many are speculating that Paisley got emotional because of the uncertain times. In fact, the entire livestream was done as a source of entertainment for his fans who are all quarantined at home.

Watch his performance of “In The Garden” below.

'In the Garden' by Brad Paisley

Brad Paisley went live on Facebook, just him and his guitar. A lady requested 'In the Garden,' and the beautiful lyrics brought him to tears.

And watch his entire Facebook Live by pressing play below.

Taking requests live from my house!