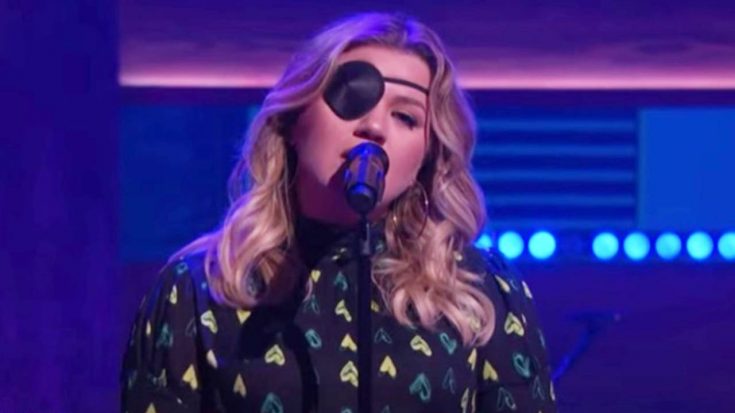 To kick off The Kelly Clarkson Show on October 9, 2020, the Emmy Award-winning talk show host performed a cover of Bonnie Raitt’s “I Can’t Make You Love Me” for her Kellyoke segment.

Raitt released the song in 1991 as the third single from her album Luck of the Draw and became one of her most successful singles of her career, peaking at number 18 on Billboard‘s Hot 100 chart and number six on the Adult Contemporary charts.

Many singers have covered this song including George Michael, Adele, and Priyanka Chopra.

Now, you can add Kelly Clarkson to that list.

Standing in front of her virtual audience, the singer lent her signature soulful vocals to the almost 30-year-old song. One thing you may notice when watching this performance is that Clarkson is wearing an eye patch.

Turns out, she got an allergic reaction to some dust getting in her eye while filming something for The Voice and had to wear the eyepatch for a few days while it healed.

Even though she looks a little silly with her eyepatch, she still gave an incredible performance, and we’re sure Bonnie Raitt would approve! Watch Clarkson’s cover below.