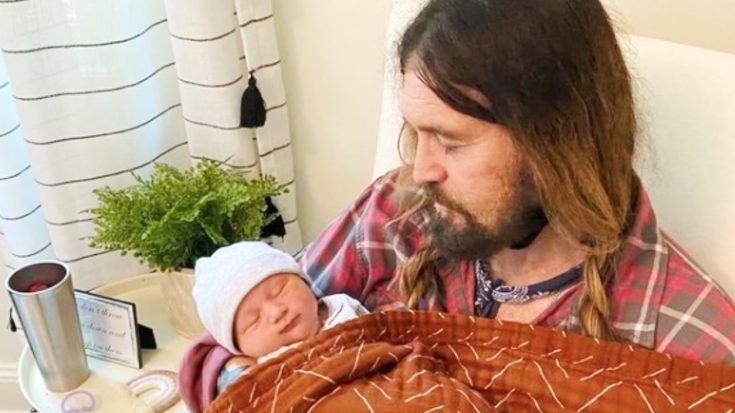 The new parents shared several photos of their baby boy on social media.

“God poured every bit of mercy, tenderness, beauty and strength into him and Stella during her herculean feat of birthing him,” Braison said.

“…we are more exhausted and more in love than I could have ever been prepared for…” Stella said.

After the new parents shared the news of Bear’s birth, his proud “Pawpaw” celebrated his arrival with a post of his own.

“Congratulations to my son and his amazing wife Stella on the birth of my grandson Bear Chance Cyrus,” Billy Ray said. “Holding him yesterday I realized the circle of life is once again complete in God’s perfect order and plan.”

Even though Billy Ray met Bear shortly after he was born, he didn’t share any photos of him for a few weeks. Finally, he posted his first photo of him and Bear on Wednesday (June 30).

The adorable snapshot shows Billy Ray snuggling Bear in his arms. Bear appeared to be sleeping, and had a small smile on his face at the same time!

You can tell that Billy Ray is in awe of his grandson. He captioned the picture, “Papaw Cyrus holding Bear Chance Cyrus.   Or…. is He holding me ?  Probably both are accurate assessments!!! Thanking God for all my blessings . Amen.”

Take a look at the too-cute photo of Billy Ray and Bear below. Congratulations to the whole Cyrus family on their new addition!