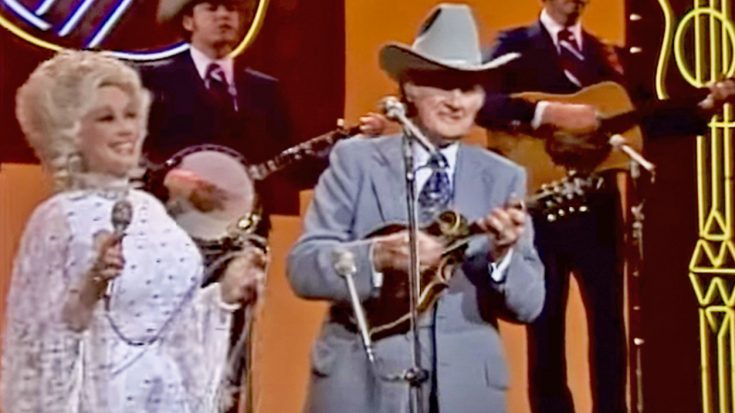 Bill Monroe changed the music industry forever over the course of his 69-year-long career, credited as the creator of the entire genre of bluegrass music. Taking place during the 1978 CBS television special, Fifty Years of Country Music, Monroe teamed up with fellow music icon Dolly Parton for a toe-tapping rendition of the bluegrass hit, “Mule Skinner Blues.”

I had the honor of photographing Bill Monroe on 13 August, 1987, a month before his 76th birthday and just after Gibson had rebuilt his iconic F5 mandolin.

Posted by Classic Bluegrass Pictures by Rick Gardner on Wednesday, May 4, 2016

Parton had her charm turn up all the way during their bluegrass duet, the bubbly country singer making flirty comments Monroe’s way throughout the entirety of their performance. Monroe and Parton traded off singing the iconic lyrics, their onstage chemistry between the two legends electric.

While originally released by Jimmie Rodgers in 1930, Parton took on “Mule Skinner Blues” in 1970 for her album The Best of Dolly Parton. The song went on to earn her a Grammy nomination as well as another Top 10 hit on the country charts, the song quickly climbing to No.3.

Always keep a song in your heart. 🎵

You can see their duet below.