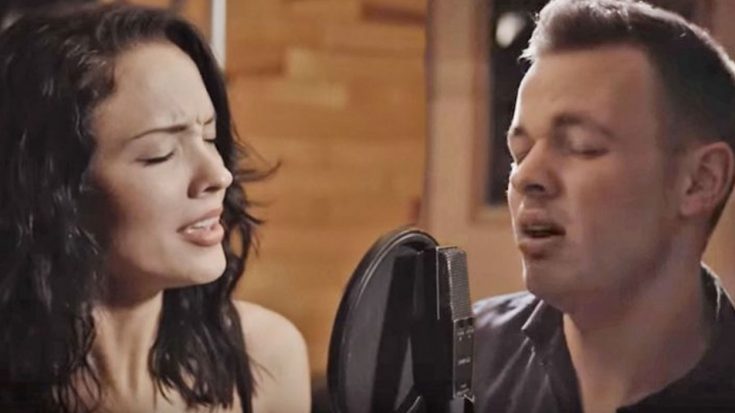 Country music sensation Chris Stapleton and international superstar Justin Timberlake introduced George Jones‘ country classic to a whole new generation following their explosive duet of “Tennessee Whiskey” at the 2015 CMA Awards. Following their jaw-dropping duet to the tune of the beloved country classic, a series of breathtaking covers from artists of virtually every genre began to erupt across the internet.

Two young artists by the names of Clark Beckham and Madison Ryann drew inspiration from Stapleton’s groundbreaking performance, resulting in a heavenly duet of the country classic. Their vocals enchant with hauntingly beautiful harmonies throughout their performance. Beckham and Ryann’s voices intertwine in a surreal manner that will leave you breathless.

“You’re as smooth as Tennessee whiskey/ You’re as sweet as strawberry wine,” they sing eloquently to one another. “You’re as warm as a glass of brandy/ And honey, I stay stoned on your love all the time.”

Currently residing in Nashville, Beckham grew up in White House, Tennessee. The 24-year-old singer developed his music skills playing in church choirs and on street corners. He competed on Season 14 of American Idol where he finished in the Top 5 after earning his ticket to Hollywood with stunning rendition of James Brown’s “It’s a Man’s Man’s Man’s World.”

“Tennessee Whiskey” was originally recorded by country music artist David Allan Coe back in 1981. A few years later, Jones released his own version of the song as the third single off his 1983 album Shine On. The Possum’s take on the song was highly well-received, peaking at No. 2 on Billboard’s Hot Country Singles.

Stapleton’s cover of “Tennessee Whiskey” sky-rocketed his career as a country music singer, taking home a staggering three CMA Awards that year including “New Artist of the Year,” “Male Vocalist of the Year,” and “Album of the Year.” While his 2015 album Traveller was his debut to country music, Stapleton was nowhere near a stranger to the world of music.

Stapleton experienced an enduring career as a songwriter in the decade prior, penning major hits such as Luke Bryan‘s “Drink a Beer,” Thomas Rhett‘s “Crash and Burn,” and Tim McGraw‘s “Whiskey and You.” He is married to fellow singer-songwriter Morgane Hayes.

What an incredible song with such a rich history! You can listen to Clark Beckham and Madison Ryann’s mesmerizing duet to “Tennessee Whiskey” in the video below and be sure to let us know how you like it in the comments!