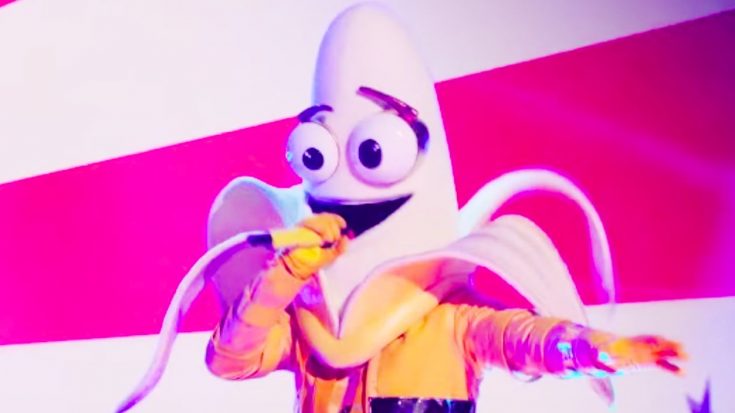 The Masked Singer did things a little differently for Season 3. The show opted to separate its contestants into three groups, labeling them Group A, Group B, and Group C. Three contestants from each group got the chance to move on into the mega-finals as members of the Top 9.

The Top 9 episode of Season 3 aired on April 1. And although it may sound like an April Fool’s joke (we promise it’s not), a standout performance of the night came from the Banana, who sang a Southern rock staple.

Of course, the song we’re talking about is Lynyrd Skynyrd‘s “Sweet Home Alabama.”

Released in 1974, “Sweet Home Alabama” is considered an American Anthem. The song was written by Skynyrd’s lead singer Ronnie Van Zant along with late guitarists Ed King and Gary Rossington.

We bet the Skynyrd guys never thought they would see a banana-masked celebrity rock out to “Sweet Home Alabama” on a reality TV competition! But now they can say they have.

Those who listened to the Banana sing “Sweet Home Alabama” felt pretty confident the celebrity behind the mask was an experienced rocker. After his performance was posted on YouTube, viewers flocked to the comments to share their thoughts on his identity, and many named the same person.

There seems to be a general consensus among viewers that the Banana is none other than Poison frontman Bret Michaels.

I’m still living here in the bushes & respecting the thorns. I’m starting to take on their appearance & color ?? #AutoScrapOgraphy

A post shared by Bret Michaels Official (@bretmichaelsofficial) on Apr 1, 2020 at 6:34pm PDT

But fans of The Masked Singer will have to wait just a little longer to find out if their guesses are correct. Even thought the Banana landed in the bottom three following his performance, he was not chosen to be unmasked.

So his rendition of “Sweet Home Alabama” landed him in the Top 8, and gave him the chance to sing another day!

Tune in to the Banana’s performance below and let us know who you think he is. Do you also believe him to be Michaels, or do you think he’s someone else?

No matter what, he made it clear he knows how to rock and roll!