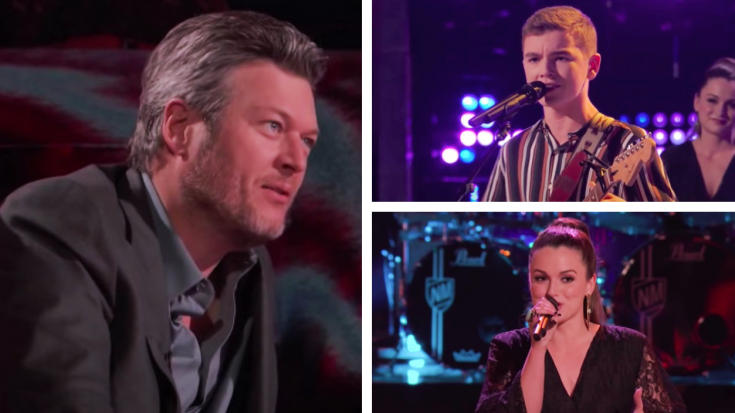 Blake Shelton was left with a tough decision to make after two of his Voice team members participated in the Season 18 knockouts. 22-year-old Joei Fulco and 14-year-old Levi Watkins faced off in the knockout, and each sang a country song.

Fulco performed “When Will I Be Loved,” which was written by Phil Everly of the Everly Brothers, who originally recorded it. The song was later covered by Linda Ronstadt, and her version peaked at the second spot on the all-genre Billboard Hot 100.

Ronstadt’s rendition of the song was also a number one hit on the Hot Country Singles chart.

As for Watkins, he went full-on outlaw for his performance. He sang Waylon Jennings‘ “I Ain’t Living Long Like This,” which was released in 1979 and was written by Rodney Crowell.

Like “When Will I Be Loved,” “I Ain’t Living Long Like This” was a smash hit. It claimed the number one spot on the country charts in both the U.S. and Canada.

Watkins sang first during the knockouts, then Fulco followed up with her performance.

After they finished singing, Shelton remarked how funny it was to hear Watkins sing “I Ain’t Living Long Like This,” considering how young he is. “You’re fourteen, and you’re singing a song about being in prison,” he said.

Shelton knew it would be a challenge for Watkins to “sell” the song, but was impressed to see how well he pulled it off. “And buddy you did it, it was incredible,” he said.

As for Fulco, Shelton praised her for taking the direction offered by mega mentor James Taylor, which was to carefully pick the moments she let her voice explode with power. “I think you did a great job of honoring the Linda Ronstadt version and not oversinging,” Shelton said.

John Legend also had quite the compliment to share, telling both artists they delivered “perfect performances.” That certainly didn’t make Shelton’s job any easier!

In the end, he chose Fulco as the winner of the knockout, saying he can’t wait to further explore the country-rock nature of her voice.

Tune in to the video below to see Watkins and Fulco’s full knockout performances along with the coaches’ comments. Do you think Shelton made the right choice?