Andy Kaufman Does Elvis Impression On ‘The Johnny Cash Show’ 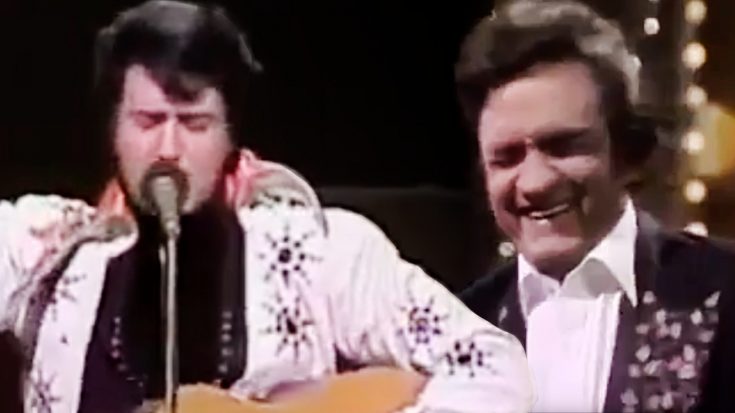 Two years after the tragic loss of Elvis Presley, comedian Andy Kaufman brought the music legend back to life in a way never seen before.

Kaufman was formally known as an entertainer and actor, often describing himself as a man of song and dance. Frequently performing on late-night talk shows such as Saturday Night Live and Late Night with David Letterman, the entertainer made a name for himself in Hollywood.

In similar fashion, The Johnny Cash Show was famous for its popular guest appearances. Running 58 episodes from 1969 to 1971, the series brought on some of country’s biggest stars. From James Taylor to Kenny Rogers, the audience was always in for a treat.

On the 1979 Christmas special of the show, Johnny Cash welcomed Kaufman to the stage with open arms. Introducing him to the audience, Cash expressed Elvis’ personal gratitude for the entertainer.

“You know, Elvis Presley once said that out of all the Elvis imitators, the one that he enjoyed the most is our guest Andy Kaufman.”

Live on The Johnny Cash Show, the viewers got a performance they’d never forget. Kaufman, known for his hilarious impressions, got into full Elvis character from the midnight-black wig to the bejeweled white jumpsuit. It was only seconds into his act that the crowd was stunned by Kaufman’s rendition of,  “That’s When Your Heartaches Begin.”

From the hip shuffle to the low baritone, it appeared as though the King of Rock and Roll was right there on stage. Before performing the hit, in full character, Kaufman pleased the patrons with a story of how Elvis crafted his first record.

With no expression gone unnoticed, the performer danced around the stage mimicking the star’s famous stage act. Continuous cheers came from the crowd throughout the performance as Elvis’ spirit was remembered.

Although Kaufman continued on to perform at various events, this would be one of his final impersonations as the entertainer passed away four-years later in 1984.

Watch Andy Kaufman stun Elvis’ fans across the world with his rendition of “That’s When Your Heartaches Begin” below.