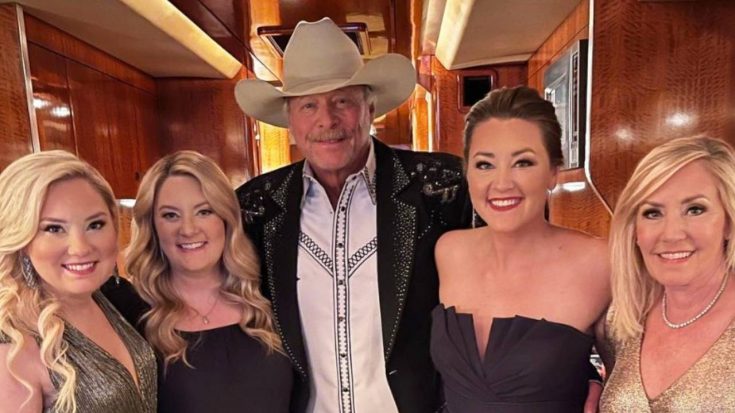 Death, taxes, and Alan Jackson in a cowboy hat. Those were three things we thought were certain in life. But, as it turns out, Alan Jackson occasionally takes his signature cowboy hat off.

Like most people, Jackson spent the Thanksgiving with his family. They took a big family photo to celebrate the holiday. The photo included his wife, Denise, and their daughters and their partners. Ali and her husband Sam Bradshaw, Mattie and her fiancé Connor Smith, and Dani and her boyfriend Sam Carrington.

But the first thing we noticed was that Alan wasn’t wearing his signature silverbelly cowboy hat. His hat color is so iconic that he named his whiskey brand after it!

🥃 @OfficialJackson has launched Silverbelly Whiskey (@SilverbellySips). It's named after Alan's signature cowboy hat, the color of which is "silverbelly."

No promises that it'll make you cut a rug quite like this guy though… 😂 https://t.co/NXJfCFdlLH

Fans reacted to his Thanksgiving post by noting how they barely recognized him without his hat!

“You look so different without your hat,” one fan wrote.

Another said, “Almost didn’t recognize you without that signature hat”

Alan was also rocking some facial hair other than his normal mustache, which made him a little more unrecognizable.

See the photo below.

Happy Thanksgiving, from our family to yours! pic.twitter.com/rSCLGmCkHl