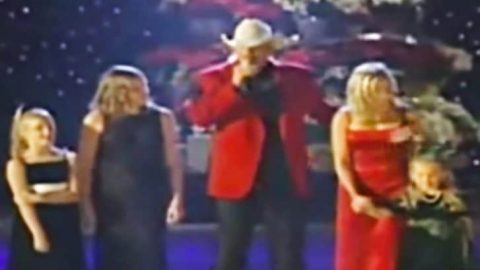 The holidays are all about spending time with your family and Alan Jackson proves this notion to be true while performing in his CMT holiday special, Alan Jackson: Let It Be Christmas.

During the special, Jackson performed well-known Christmas songs including “Have Yourself A Merry Little Christmas,” “Santa Claus Is Comin’ To Town,” “Silent Night,” “Jingle Bells,” and “Away In A Manger.”

He also sang his self-penned Top 40 hit “Let It Be Christmas” off of his 2002 holiday album of the same name. Alan began the song solo and about halfway through, his wife, Denise, and their three young daughters walked onstage to sing along with him.

They were also joined by Nashville’s Belmont University Choir and the W.O. Smith Children’s Choir. In the special, Alan and Denise shared stories and memories of the holidays in their home, which will touch your heart.

If this doesn’t get you in the Christmas spirit, we don’t know what will! Enjoy the performance below.