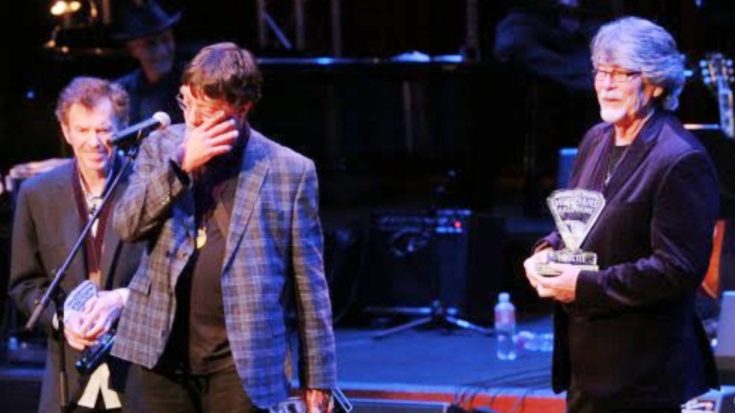 The Musicians Hall of Fame inducted several artists into their ranks, among them being the country band Alabama.

During the ceremony, Jeff Cook, Teddy Gentry, and Randy Owen walked on stage and each spoke about their 50 years as a band, and all the years they spent growing up (they’re cousins) playing music together.

“From a band standpoint, I’ve had to play my own music since we got started. I remember me and Randy, when we were growing up, running across the cotton field in the afternoon, to pick out a new Beatles chord on guitar,” said Gentry during the ceremony. “Music was about all we had to lean on and hope for and live for. Our families were so poor and music was that magic thing that held us together.”

For the first time ever, the Musician’s Hall of Fame also gave out a Lifetime Achievement Award.

And Alabama deserves it.

With over 43 number one hits to their name (and 21 in a row), Alabama has sold a combined 80 million records worldwide, making them one of the world’s best-selling bands – of any genre – of all time. They are also the most awarded band in the history of country music with over 200 awards from a variety of places including the CMAs, the ACMs, the Grammys, and Billboard Awards, among others.

Who's watching the Recording Academy / GRAMMYs Awards tonight? This picture is from when we received the award for best country performance by a group in 1983!! ?

Of the two huge honors, Owen said, “This makes all the hours I spent trying to work up the intro to ‘Mountain Music’ and ‘Lady Down on Love’ and ‘Tennessee River’ and ‘Face to Face’ and those songs that I worked on so long to get the lick, it makes it seem all worthwhile. I don’t know how long I spent on the sound of the guitar in ‘My Home’s in Alabama,’ so it would sound like the whole room was full. Still today when you kick into ‘Mountain Music,’ the audience knows the song. It came from a lot of work and a lot of thought.”

The induction comes just a month and a half after the band had to postpone the remainder of their 50th Anniversary Tour due to Owen’s “ongoing complications” with his health.

Fans and friends, unfortunately, we have to postpone the remainder of the "50th Anniversary Tour" due to Randy’s ongoing…

They have since rescheduled the dates for the summer of 2020.

The band took to Facebook to thank everyone once again for the honor, writing, “What an honor to be inducted into The Musicians Hall of Fame last night as well as receive the first-ever Lifetime Achievement Award. Thank you!”

Jason Aldean honored Alabama with a performance of “Tennessee River” and “Love In The First Degree.”