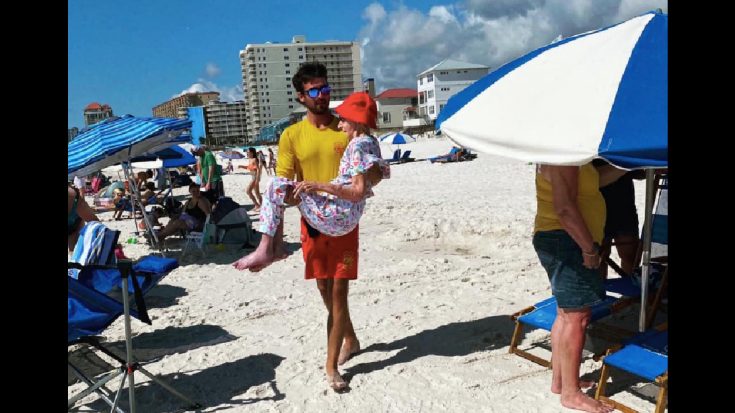 95-year-old Dottie Schneider had one wish….the feel the sand between her toes and dip her feet in the ocean. Thanks to her daughter and a group of special lifeguards, Schneider’s wish was granted.

Dottie Schneider and her daughter, Kimberly Waterbury, along with a couple of friends, made a trip from their home in Chandler, Indiana, to spend a week in Orange Beach, Alabama. Dottie, who suffered a stroke four years ago, needed someone to help make her way to a spot on the beach. Kimberly was attempting to push her mom in a wheelchair through the sand when a lifeguard approached and asked if he could help.

Waterbury told the Associated Press that lifeguard Shane Martin pulled up on an all-terrain utility vehicle and asked if they needed help. When he was told that Dottie couldn’t walk but wanted to go down to the beach, Martin helped the woman into his vehicle and drove to the spot on the beach where lounge chairs and an umbrella were waiting. He then lifted 79-pound Schneider and placed her comfortably in a chair.

The lifeguards didn’t only help Miss Dottie one day, they continued to pick her up and take her to her spot on the sand for the next four days.

“That was overwhelming,” Kimberly said. “They were faithful. They were there. It made my mom’s whole trip.”

“Any day she felt like coming down, we wanted to make sure she got there,” says Brett Lesinger, beach safety division chief. “We told her to holler if the sun was too much.”

But, Lesinger said it never was too much for Dottie who enjoyed her shady spot under a beach umbrella for hours at a time.

“We are forever indebted to the guys with Orange Beach Surf Rescue,” Kimberly said. “They made my mother feel special. She was not made to feel like she was a burden on anybody.”

Kimberly said that they offered numerous time to tip the lifeguards, but the offers were refused as the men said they were doing a public service.

“All the pay we need is watching her smile,” they said.

See photos of Miss Dottie’s special trip to the beach below.