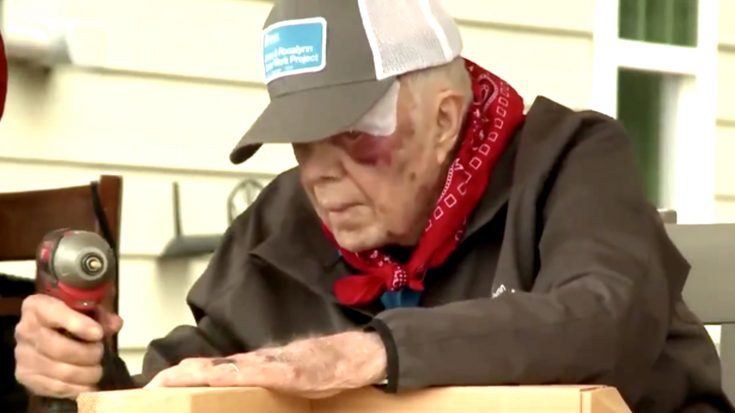 Just one day after the Former President fell at his Georgia home and needed stitches to close the wound, he insisted he still volunteer at a Habitat For Humanity event in Nashville.

Clearly, he has a big heart – and this was a very important cause for him.

Fmr. President Jimmy Carter just turned 95 years old on October 1st – making him the longest-living president in the history of the United States! The second-longest was George H. W. Bush who passed away almost a year ago at the age of 94.

President Carter also has battled a series of health problems over the last few decades, but each time has pulled through with a great recovery.

This includes his recent fall just after his birthday which left him with a black eye and required 14 stitches.

Statement from The Carter Center on Jimmy Carter’s Health pic.twitter.com/Awhs6pdbGw

Despite the injury, President Carter still was eager and ready to head out to Nashville for a Habitat For Humanity event where he and many other contributors like Trisha Yearwood, Garth Brooks, Senator Marsha Blackburn, and many many others.

Carter said that “he had a No. 1 priority and that was to come to Nashville and build houses” – even though he had to make a stop at the hospital for his injury.

This event will be President Carter and former First Lady Rosalynn Carter’s 36th Habitat For Humanity project they have volunteered for.

Watch the full report from NBC News below.