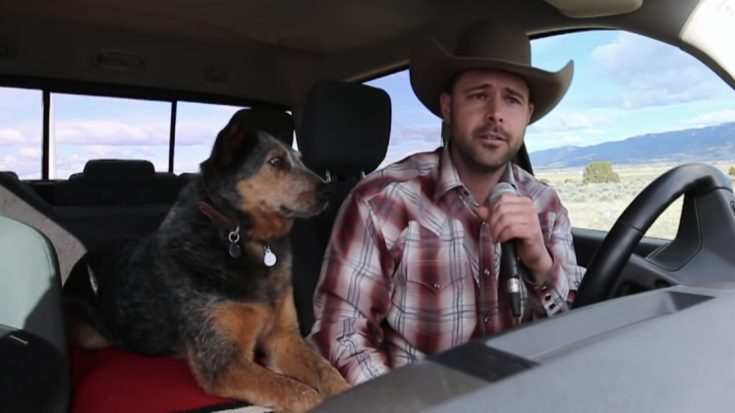 Late country singer Chris LeDoux was honored with a unique cover performance during an episode of America’s Got Talent.

In an AGT first, the show started airing virtual auditions due to the COVID-19 pandemic forcing the show to eliminate its studio audience.

The first virtual audition brought us an amusing audition from a singing Utah cowboy and his dog. Most AGT auditions involving pets usually include tricks or acrobatics of some sort, but this dog has a different talent….he sings country music. According to ranch hand and proud dog owner Chris Peterson, Sid is supposed to be a cow dog but is afraid of cows. So, apparently the pup decided that he would serve as a trusty companion and canine vocalist instead.

If you missed it Syd and I sang a little song this morning to the judges on @agt America’s got Talent. We ended up with 5 yes votes (including one from Simon’s Dog) thanks for the support from all who watched. #agtfromhome special thanks to @mckensie_shea @cdphotog and @dog_training_360 for helping us to make it happen.

Sid remained quiet and appeared to be a little bit shy during the judges’ pre-performance interview with his owner. But, as soon as the music for Chris LeDoux’s 1992 hit “Look At You Girl” came on and Chris began to sing, so did Sid. It goes without saying that Sid’s “singing” was more like howling, but it was too adorable to watch. And, Chris has an impressive voice on his own! The judges agreed, with longtime judge Simon Cowell calling the performance “brilliant.” Howie Mandell said that this act “is exactly what the world needs right now.”

The duo received a “yes” from all four judges (and other from Simon’s pup). But, that doesn’t necessarily mean that they’ll be moving on to the next phase of the show. AGT host Terry said that this act is now “under consideration” to join this season’s competition. It’s unclear what the process for home auditions will be, but we can assume that the producers and judges will most likely have the final say as to which acts will ultimately move on.

Check out Chris and Sid’s performance in the video below. To hear more from Chris Peterson, check out his Instagram page (aka “a cowboy lover’s dream”) by clicking here.