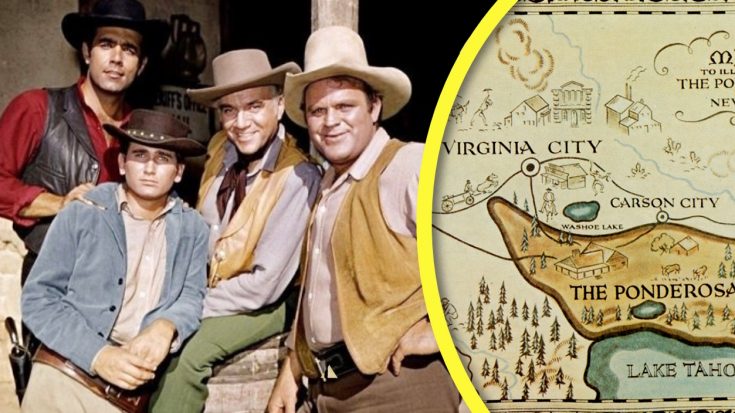 For more than a decade, American television viewers were treated to NBC’s hit western show Bonanza that centered around the Cartwright family – who lived on a sprawling ranch outside of Virginia City, Nevada. It told the story of their adventures, misfortunes, and typical life problems found in any western of that time.

Aired from 1959 to 1973, Bonanza was one of the best-known television shows of its time – and due to that, it amassed a huge cult-like following that still loves to watch reruns today.

But, with all those fans out there – how many knew these crazy facts about the show? As you scroll through this list, keep track of how many surprised you and let us know in the comments.

The creator, David Dortort, had envisioned Bonanza as a then-modern-day presentation of King Arthur, but just set in the Old West. The patriarch, Ben Cartwright represented King Arthur, and his sons were the King’s knights.

Each Actor Wore The Same Costume For Nearly Every Single Episode

To ease editing and make each roll of film go the farthest, the actors were dressed nearly identically in each episode. This made it so that when they needed to fill in a part with some stock footage or re-use a scene without having to pay to re-shoot another, they could and everyone would appear dressed exactly like they had in the whole episode.

Because of its extreme cost, that was another driving factor to re-using the outfits on characters.

The Ponderosa Ranch Really Existed…And You Could Get Married There

The setting of the show was near to the famous Lake Tahoe. A pair of developers in the area quickly realized that as the show got more popular, more and more tourists were coming around looking for the actual Ponderosa Ranch – but it didn’t exist…yet.

To cash in on this newfound tourism, they decided to build one! It opened in Incline Village, Nevada in 1967 and was known as a local theme park that featured a lot of show-based amusements and portions of sets and scenery that was used in the later seasons. They even offered fully-featured Bonanza themed weddings!

The Cast Was A Musical Bunch

Nearly every one of the actors on the show had their own music records outside of their acting career, but in 1964, they all got together in their Cartwright personas and sang on a record titled Christmas at the Ponderosa.

Lorne Green found great success as a musician while still starring in Bonanza and his biggest hit was “Ringo” from the album Welcome to the Ponderosa – a nod to his famous TV character.

Pernell Roberts (Adam) Tried To Leave The Show Every Year

Roberts, who played the eldest and highly-educated architect son “Adam,” was not fond of the show for its simple-minded content and lack of diversity within the cast. He was bothered that his character, a man in his 30s, was subjected to follow every whim of his widowed father.

Reportedly he called the series “junk” and accused NBC of “contributing to the dehumanization of the industry.” He also took issue with the way women were often portrayed on the show and eventually left after the 1964-1965 season. But, that wasn’t for lack of trying.

Allegedly, he tried to leave every year of his original six-year contract, but NBC made him stay.

The Museum of Hoss

Dan Blocker, who played Eric “Hoss” Cartwright, was a big fella. He came in as a 6ft 4in, 320-pound guy who clearly had a following as big as he was!

Born in the tiny Texas town of O’Donnell, they erected a museum in his honor that is filled to the brim with various memorabilia and artifacts from his career and have named him “O’Donnell’s favorite son.”

Landon, who is known for playing Joe Cartwright, never used his real name for his acting career and instead opted for a stage name. But, even more peculiar than that is how he came about that stage name.

Born Eugene Maurice Orowitz, Landon decided he needed to get a stage name after meeting with one of the first agents in his career. So, he opened a phone book and picked a new one!

His career in media began on radio, like many film stars of the time, but he wasn’t just your standard fare radio announcer.

Green became chief broadcaster for the Canadian Broadcasting Corporation (CBC) and was known as “the voice of doom” during The Battle of Britain. While he was doing that, he needed a way to time his speaking more efficiently – so he invented a stopwatch that ran backward!

If you were a real fan, you probably knew most of these – but tell us about any that surprised you! And be sure to check out this rare video about the real-life Ponderosa Park in Lake Tahoe, Nevada below!