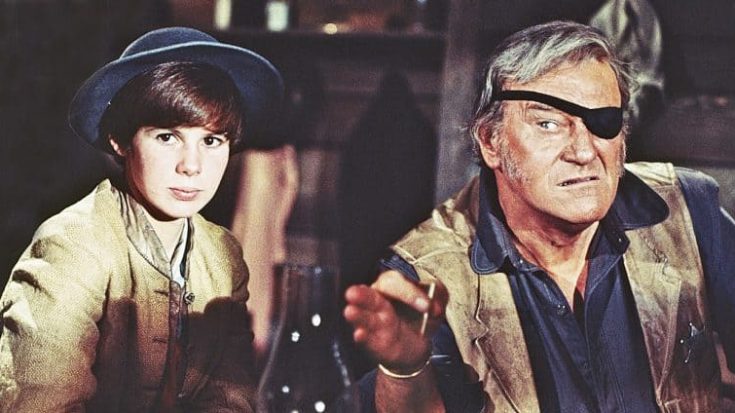 One Of Wayne’s Best Films

Over the course of his 50-year career, John Wayne managed to establish himself as one of the leading actors in the movie industry. He was primarily known for appearing in Westerns, including 1969’s True Grit.

Perhaps one of Wayne’s most notable projects, True Grit was adapted from the 1968 novel of the same title. Wayne starred as U.S. Marshal Rooster Cogburn in the film, who a young girl named Mattie Ross (Kim Darby) calls on to help her catch her father’s killer.

Like Father, like son! Duke & Ethan on the set of True Grit ?? What movie set would you visit John Wayne on? pic.twitter.com/vAT5TgZ4aZ

Country music singer Glen Campbell starred in the film as a young Texas Ranger named La Boeuf. In addition to acting in the film, Campbell also sang its title song, which was nominated for an Academy Award for Best Song and a Golden Globe for Best Original Song.

True Grit inspired a couple of sequels and a remake, which was released in 2010. The remake was nominated for an impressive total of ten Academy Awards, including Best Picture.

It’s clear that the original True Grit left behind quite a legacy. But some of the facts surrounding the film may not be as clear to you, even if you have seen it over a dozen times.

Want to learn seven things you likely never knew about True Grit? Then go down below to get started!

1. The Film Led Wayne To His First Academy Award

Believe it or not, Wayne had never received an Academy Award prior to his appearance in True Grit. Even more surprising is the fact that Wayne had only been nominated for one Best Actor award before, and that was in 1949.

20 years later, Wayne was nominated for a Best Actor award for True Grit and was up against some strong competition. Two of the other actors nominated for the award included Richard Burton for his role as Henry VIII in Anne of the Thousand Days and Peter O’Toole for his role as Arthur Chipping in Goodbye Mr. Chips. But Wayne emerged the victor, earning the first and only Academy Award of his career.

As one of the most popular films of his career and the one that helped him earn an Academy Award, you would think that Wayne would have liked True Grit. But the opposite was the case.

According to IMDb, Wayne was not satisfied with the film. During the promotional tour for True Grit, he made it clear that he liked his other movies better. When interviewers would ask him about the film he would tell them that he preferred his other projects, particularly 1939’s Stagecoach.

Wayne was in the minority though, because the film was a huge success and is now considered to be one of the best Westerns ever made.

3. A Stunt Double Performed Almost An Entire Scene For Wayne

In one of the most intense scenes of True Grit, Rooster Cogburn takes off on horseback in a wild pursuit of outlaw Ned Pepper and his gang. You may not have realized this before, but the majority of that scene was performed by a stunt double, not Wayne.

Stuntman Jim Burk is the person credited for acting as Cogburn in the scene. There is only one point in the scene that shows Wayne, and that’s when the camera moves in for a close-up. That’s movie magic for you!

4. Mattie Ross Was Originally Supposed To Be Played By Wayne’s Daughter

Many actresses were considered for the role of Mattie Ross before the part was finally granted to Kim Darby. Ronald L. Davis’ book Duke: The Life and Image of John Wayne states that Wayne had pushed for his daughter, Aissa Wayne, to be given the part, but she didn’t get it.

Other actresses producers looked at for the role included Sally Field, Karen Carpenter, Sondra Locke, and Tuesday Weld. Mia Farrow was the first actress to actually be cast in the role, but she eventually backed out.

The role ended up going to Darby, and the rest is history!

5. Elvis Presley Was Almost In The Movie

Elvis Presley starred in many movies during his lifetime, and he came close to appearing in True Grit too. The producers originally wanted Presley to act in the film as Texas Ranger LaBoeuf. But as we now know, those plans fell through.

Everything seemed set for Presley to appear in the film until his manager, “Colonel” Tom Parker said that Presley had to have top billing. With a star as big as Wayne playing the lead character, that was something the producers simply couldn’t do.

The producers turned to another singer after Presley was turned away…country music star Glen Campbell. Now, we couldn’t picture anyone else but Campbell as La Boeuf!

Even those who don’t know much about True Grit likely recognize Wayne as Rooster Cogburn, primarily because of the eye patch worn over his left eye. However, this signature accessory was one that Wayne never wanted to wear in the first place!

Furthermore, Cogburn does not wear an eye patch in the book that the film is based on, although he does only have one eye. So with all of that considered, it’s surprising that Wayne ended up wearing the eye patch when all was said and done.

7. The Actors’ Ages Were Way Off From Their Characters’

It’s common practice in the movie industry to have an older actor play a younger one, and vice versa. But usually the age differences aren’t too extreme…for example, a 20-year-old actor may play a high school senior in a film and be able to make it believable.

But when it comes to True Grit, a couple of the actors’ real-life ages were way off from the ones of their characters. For starters, Rooster Cogburn was supposed to be close to 40 years old in the film, while Wayne was 61 at the time.

The most striking age difference is between Kim Darby and her character Mattie Ross. In the film, Ross is supposed to be a 14-year-old girl. But in real life, Darby was a 21-year-old mother to a newborn baby girl. That’s a pretty big difference!

There you have it folks! Head on over to the comments to tell us which one of these facts surprised you the most!