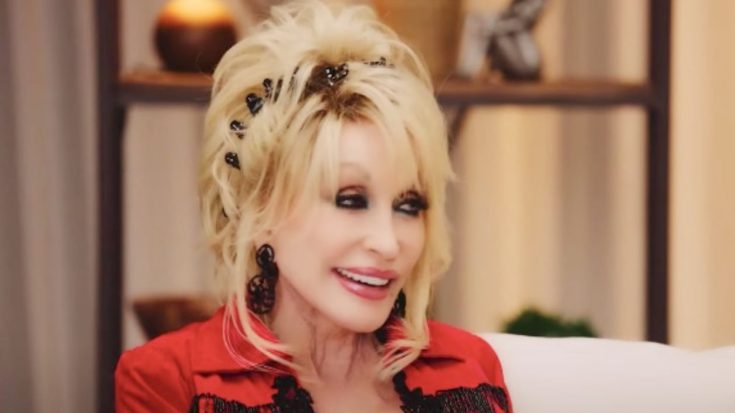 Credited as one of the best singer-songwriters in history, there’s no better way to describe Dolly Parton than to call her a living legend. In addition to her work as a singer and songwriter, Parton is an accomplished actress, businesswoman, and philanthropist.

Parton serves as proof that great talent can be found in even the most unlikely of places. Born into poverty, she grew up in a tiny cabin in Sevier County, Tennessee near the Smokey Mountains.

But Parton’s dreams were much bigger than the cabin she shared with her parents and 11 brothers and sisters. Those dreams took her to Nashville at age 18…and you all know what happened next.

As a global phenomenon, not much remains unknown about Parton and her music. Head below to learn some fun facts about her that you probably didn’t know already!

Parton’s namesake amusement park, Dollywood, is one of the most popular theme parks in the world. Since its opening in 1986, Dollywood has attracted millions of visitors with its thrill rides and roller coasters.

But believe it or not, Parton is actually terrified of riding roller coasters! She revealed her fear during an interview with USA Today, explaining why she’ll never ride the coasters at Dollywood.

“I’ve got too much to lose—like my hair!” she said. “Lord knows what else could fall out of me. I can think of a lot of other things I’d rather do than be scared to death [on a coaster].”

As a young teenager, Parton got the chance of a lifetime when she was invited to perform at the Grand Ole Opry. This was long before she made her big break, so she was in absolute awe of everything she saw…including one of the performers.

Johnny Cash was the one performing that day, and he left a lasting impression on Parton. During an interview with Nightline, Parton revealed that Cash was her first celebrity crush.

“I was sitting in the audience and that’s when I first knew about sex appeal,”  she said. “He had this tick when he moved his shoulder… and it was still sexy. It still got to me.”

Well, can you folks blame her?

3. She Has Hidden Tattoos

For years, rumors have swirled that Parton’s body is covered in a whole bunch of secret tattoos. These rumors theorize that the reason why she always wears long sleeves is because of tattoos that she has on her arms.

Parton finally set all of the rumors straight during an interview on Today. While she dismissed the claims that she has an extensive amount of body art, she did admit that she has some hidden tattoos that no one ever sees except for her husband, Carl Dean. “I do have a few little tattoos, but they were mostly done to cover scars because I’m so fair,” she said.

4. She Met Her Husband On Her First Day In Nashville

Parton and her husband Carl Dean celebrated their 50th marriage anniversary on May 30, 2016. Despite Parton’s immense popularity, Dean has managed to stay completely out of the spotlight. But through Parton’s interviews, she’s made it obvious why she’s still head over heels for him.

The couple’s first meeting was described in a press release to celebrate their 50th anniversary. As fate would have it, the two of them met on the first day Parton spent in Nashville. They were outside of the Wishy Washy Laundromat when they locked eyes, and you could say it was love at first sight.

“I was surprised and delighted that while he talked to me, he looked at my face (a rare thing for me),” she said. “He seemed to be genuinely interested in finding out who I was and what I was about.”

Dean was obviously interested, and they were married two years later!

5. She Became The First Artist To Accomplish Something HUGE

In 1974, Parton released what has since gone on to become one of her most recognizable songs. Called “I Will Always Love You,” it flew to the top of the charts following its initial release.

By 1982 the song had entered the charts yet again when Parton re-recorded it for her film The Best Little Whorehouse in Texas. That version also topped the charts, making Parton the first artist in history to ever hit number one twice with the same song.

Ten years after the re-recorded version was released, Whitney Houston debuted her version of the song, which became an international hit. Since Parton held on to the publishing rights, she ended up earning millions in royalties off of Houston’s version.

It isn’t an uncommon thing for country artists to write a cookbook as a side project. Everyone from Tammy Wynette to Hank Williams Jr. have added the title “cookbook author” to their resumes.

After growing up in Tennessee, Parton knows how to make the best country comfort food, like her famous chicken & dumplins’. In 2006, she decided to share her culinary wisdom with the world when she published her cookbook, Dolly’s Dixie Fixin’s. Seriously, is there anything this woman can’t do?

7. She’s Most Honored By A Statue

Parton’s list of honors and achievements is endless. She received the Lifetime Achievement Award at the Grammys, has a star on the Hollywood Walk of Fame, is a member of the Grand Ole Opry, and has been inducted into over a dozen different halls of fame.

But as great as all of these achievements are, there is one that means even more to Parton. To her, the greatest honor she has ever received is a bronze statue in her likeness which is near the courthouse in her hometown. In the “About” section of her Facebook page, Parton said the statue means so much to her “because it came from the people who know me.”

We think Parton is more than deserving of that statue and all of the honors she’s received!

Which one of these facts surprised you the most? We’d love to know!