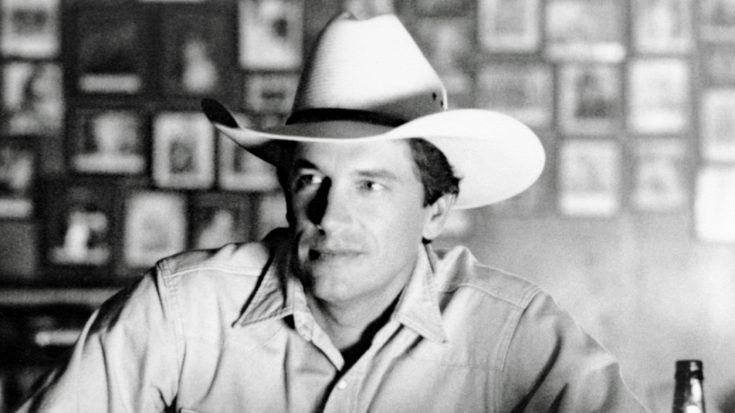 That’s who he played in the Warner Bros. film Pure Country. Dusty was a country singer who got tired of all the pomp and circumstance that his concerts had turned into. There were so many lights and fog that he could barely see his audience, and when he completely stopped singing, no one seemed to notice.

He decided to leave that life behind for a simpler country life, eventually meeting and befriending and beautiful woman named Harley Tucker and her family. They were unaware of his celebrity status, which he enjoyed. He and Harley grew to love each other and after finding out who he really was, Harley broke up with him.

He returns to performing, under the condition that he can do live shows the way he wants to, and wins Harley back at one of his live shows by singing “I Cross My Heart” to her.

Whether you have seen the movie or not, we are sure you’ve heard the music from it, seeing as the soundtrack is Strait’s most commercially successful album to date, selling over six million copies. The soundtrack included 11 songs that were featured in the movie including “I Cross My Heart,” “Heartland,” and “When Did You Stop Loving Me.”

If you have any questions about George Strait’s acting career, they will certainly be answered today. Let’s check out 4 things you must know about The King Of Country’s acting career.

In an interview with Bob Picket for KASE 1o1, Strait revealed the person who long encouraged him to get in front of a camera as an actor, not a singer. That person was Colonel Tom Parker, who had lots of experience helping a superstar singer transition into film.

Of course, Col. Tom Parker was the man known for catapulting Elvis Presley into superstardom.

Strait said in the interview, “I was first approached to do the movie, well do a movie by Colonel Tom Parker, who is, everybody knows is Elvis Presley’s manager. And well, we’ve been playing Vegas for a lot of years and he’s been coming out to see us since we just about started playing out there. We’ve come to be pretty good friends.”

“He kept telling me, ‘George, you gotta get in the movies!’ I’d just kinda laugh,” he continued.

Strait admitted that he wasn’t sure about Pure Country‘s script, but the movie’s producer, Jerry Weintraub assured him it would be great.

2. He Wanted To Act More

In a rare interview with Entertainment Tonight leading up to the movie’s premiere, Strait was asked if he was bit by the acting bug.

“It’s a little early to say,” The King said with a chuckle.

If Pure Country were to do really well and if people loved it, “I’d consider doing another movie, yeah,” he revealed.

From the sounds of it, he was pretty gung-ho about acting again, but Pure Country was not considered a box office success. It grossed over $15 million against a $10 million budget.

Check out the interview below.

3. He Only Acted In Two More Projects

According to the Internet Movie Database, Strait’s only other acting credit, besides Pure Country, is for a 2003 episode of King of the Hill, where he voiced a character named Cornell. The episode is titled “Livin’ on Reds, Vitamin C and Propane” and also features voiceovers from Travis Tritt, Trace Adkins, and Brad Paisley.

King of the Hill: It ain't better than beer, but it's close.

However, he did appear in the Pure Country sequel, Pure Country 2: The Gift. The sequel tells the story of a young woman who struggles to become a country singer. Strait plays himself and isn’t a central character in the movie. You can see him in the trailer below.

4. Pure Country Wasn’t The First Movie He Appeared In

While Pure Country was marketed as Strait’s “motion picture debut,” it really wasn’t. He actually made a cameo in the 1982 Cold War action-thriller film The Soldier in 1982.

He played himself and performed his song “Fool Hearted Memory” in the movie.

Did you know any of these things about his acting career? We sure didn’t!