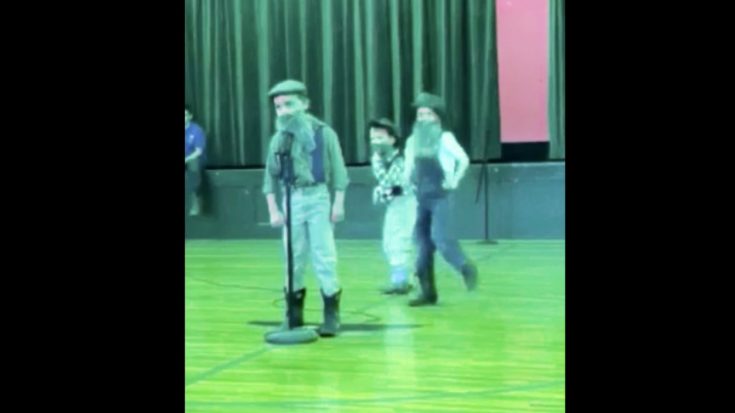 There was a bit of a bluegrass revival going on in 2000, sparked by one of the most popular films of the decade. That film, of course, was O Brother, Where Art Thou?

In the movie, the three main characters, who are escaped convicts, adopt the persona of a fake musical group in order to earn a quick buck. They go into a studio and lay down a recording of a traditional folk song called “Man of Constant Sorrow,” and it soon becomes a hit record.

Later in the film, the trio dons disguises in the form of fake beards and performs the song live at a gala dinner. They dance around on stage and have a good time, resulting in the creation of one of the film’s most iconic scenes.

Years later, three little fellas took to the stage of their school’s talent show to remake the famous scene for a new audience. The three boys dressed up like the actors in the movie, and even wore the same long, fake beards for the complete effect.

It’s clear that these boys had seen the movie a time or two, because they had the choreography down pat.

While all of the boys were spunky and enthusiastic, the little guy in the long blue overalls stole the show. He really got to grooving at one point!

If you’re in need of something to brighten up your day, this video is sure to do the trick. You can go ahead and watch it below…millions already have!

After you watch this video, it should come as no surprise to you that these boys won first place at their talent show. Future acts have some pretty big shoes to fill after following them!