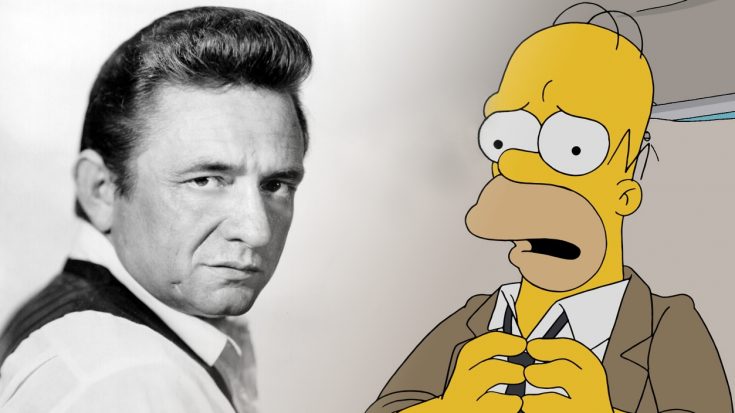 It’s no secret that Johnny Cash has a great sense of humor. He often guest-starred on the slapstick comedy show – Hee Haw. But many forget that he offered his witty talents to another unexpected comedy act…

Johnny Cash’s voice gained notoriety among the traditional country music fans in the 1950s. Little did he know that his deep voice would later get him cast for the longest-running television shows of our time.

The Simpsons first aired on December 17, 1989, and quickly became a household name. The show highlights a family living in the fictional town of Springfield – representative of Anytown, America. Following them through a series of absurd events – usually caused by the buffoonish father, Homer Simpson – the show is known to poke fun at everyday life.

Throughout the family’s ups and downs, Homer Simpson always has the help of his wife – Marge – to get him out of trouble. On the show, the couple meets in high school and have been going strong ever since.

However, Homer comes to reevaluate his relationship in the episode “The Mysterious Voyage of Homer” after he is given some very unusual advice. Aired in 1997, the episode follows the basic guidelines of the show: Homer makes a foolish decision and it results in a fight with his wife, Marge. However, this episode offered us something very special…

After Marge tries to prevent Homer from going to a local chili cook-off, she admits it is because she was embarrassed by his drunken antics from the last year.

Eventually, the high school sweethearts come to a compromise and Homer agrees to attend the cook-off and not drink.

Still, Homer finds a way to get himself into trouble.

In a chili eating contest, homer eats Chief Wiggum’s chilis that were grown by inmates deep in the jungle of Guatemala. Homer ends up entering a dream-like state where he is stuck wandering around the desert.

Homer stumbles upon a tortoise that tells him to follow him to a Mayan-esque ruin he must climb. At the top of the ruin, Homer finds a faceless Marge who disappears in the wind. All of a sudden, a coyote jumps up next to Homer – and his voice is unmistakable!

Johnny Cash appears as a coyote spirit guide to help Homer find inner peace through clarity. His advice, while bizarre, leads Homer on a quest to find his soul mate.

Cash: To make yourself complete, you must find your soulmate.

Cash: Your kindred spirit, the one with who you share an unspoken bound – a profound, mystical understanding.

After waking up hours later in a golf course, Homer sets out on a quest to figure out who his soulmate truly is. Luckily, all works out and he reunites with Marge – who, in fact, is his soulmate.

Cash was cast for the role by producers who wanted to use one of The Highwaymen’s voices. Their other top pick – Bob Dylan didn’t make the cut. Cash accepted The Simpsons offer, making a one-of-a-kind appearance in this cameo.

Fans went crazy over the coyote spirit guide. Some were even so moved by Johnny Cash’s performance, that they got it permanently tattooed on their skin.

While we might not be rushing to our local tattoo parlor, we definitely enjoyed hearing Cash’s voice again – even if he was playing an unusual spirit guide in a chili-induced dream…

Watch the full cameo of Johnny Cash’s performance on The Simpsons below and let us know what you think of his advice.