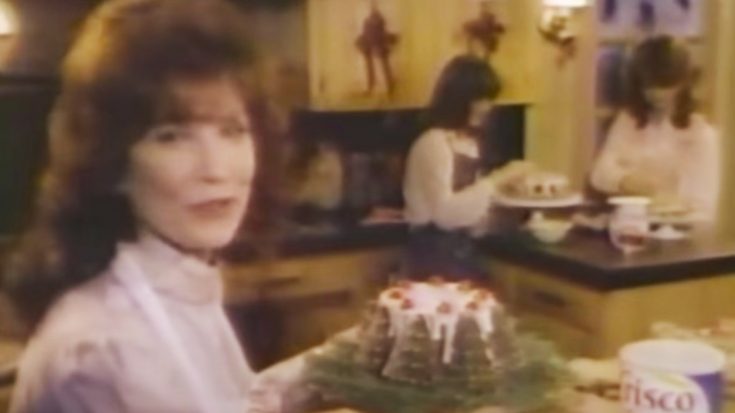 Because of her popularity, Loretta Lynn received numerous requests to star in advertisements for various companies. But she only accepted a few of those offers.

One of the offers Loretta accepted was to serve as a spokeswoman for Crisco shortening. She appeared in a number of commercials for Crisco throughout the 1980s. The commercials showed Loretta sharing some of her favorite recipes made possible with Crisco.

One commercial Loretta filmed for Crisco was released in 1984 in conjunction with the Christmas season. It also included her husband, Oliver “Doo” Lynn, and their twin daughters Peggy and Patsy.

The commercial shows Loretta baking up a storm for her family during the holiday season. She shows off her cranberry cherry pie before talking about the delicious treats her daughters made with Crisco. Patsy made some chocolate bonbons and Peggy made a wreath cake.

Loretta offered a plate of raspberry snow bars to Doo, who couldn’t resist taking a bite of one right then and there! This prompted Loretta to tease him for talking with his mouth full.

The commercial ends with Loretta, Doo, Peggy, and Patsy gathered around the fireplace and beautifully decorated Christmas tree. “There’s two things that always make the holidays special, and that’s great tasting food, and being with the ones you love,” Loretta said.

You can watch Loretta and her family in their holiday-themed commercial by pressing “play” on the video below.

Now that Loretta is no longer with us, we treasure this clip even more than before. She is so dearly missed…