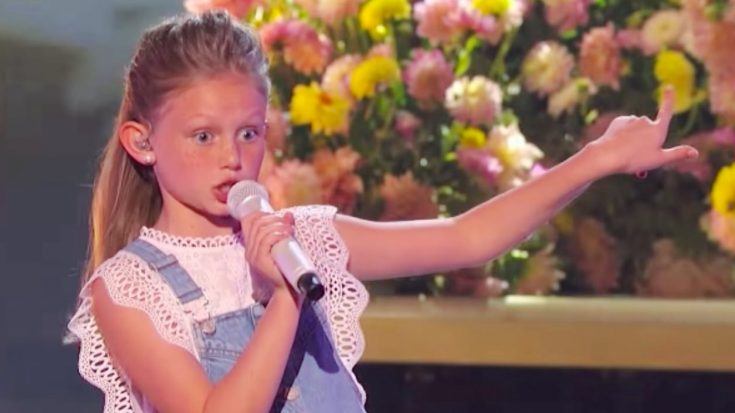 Ansley Burns is someone who instantly stood out on her season of America’s Got Talent. The young girl auditioned with an Aretha Franklin classic, but was stopped halfway through her performance by judge Simon Cowell.

Cowell told Burns that he wasn’t fond of her backing track, and felt that it covered up her voice too much. He asked her to sing a cappella, and she did.

Burns’ a cappella performance impressed all four judges, who voted to send her through to the next round. That time, she sang Carrie Underwood‘s hit song “Good Girl,” but was stopped by Cowell again.

Once more, Cowell told her he didn’t like the backing track, and asked if she’d sing a cappella. She did so, and knocked her performance out of the park.

Sadly, Burns was eliminated by the judges after that phase of the competition. But viewers got a huge surprise once the show went into lives, as it was revealed that the judges chose to bring Burns back as a “wild card” contestant.

Burns took advantage of her second shot on the show, and dug up a country classic allowed her to showcase her powerful voice and vibrant personality. The song she chose was “Swingin’,” which was recorded and co-written by country legend John Anderson.

But instead of singing the song in Anderson’s style, Burns modeled her performance after another artist’s rendition of the song. LeAnn Rimes covered the track in 2010, and changed it up by making it a little more fast-paced. She also changed some of the words so that it was sung from a female’s perspective.

Rimes released a music video to accompany the song, and gave her “Swingin'” singing character a sassy persona.

Burns embraced that same sense of spunk for her AGT performance. She danced around, twirled her hands in the air, and stomped her boots, never standing still for a second.

In doing so, Burns managed to keep the crowd and the viewers engaged in her performance. No wonder why it has so many views on YouTube!

And for once, Cowell didn’t stop Burns from singing and let her continue with the backing track! You can listen to her sing “Swingin'” by tuning in to the video below.